India: Red Salute to the Agricultural Labourers of Sangrur district of Punjab - Long Live Spirit of Naxalbari by Harsh Thakor 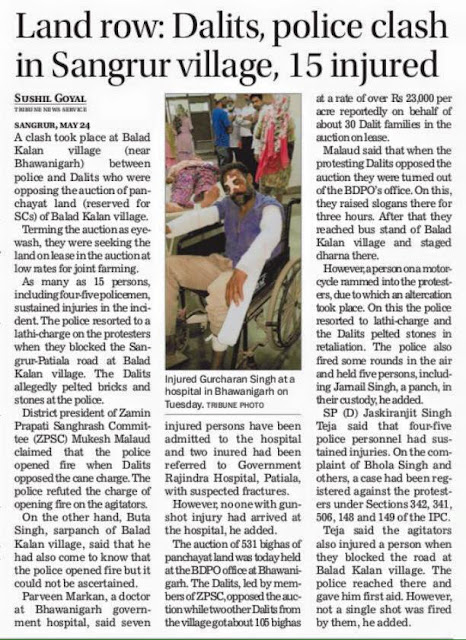 Police firing has taken place on dalit peasants in Sangrur district of Punjab.

In recent weeks a protracted agitation has been taken up by the zameen prapt sangharsh committee in Sangrur demanding 1/3rd rights for dalits in a panchayat.

Backed by the ruling party the police clamped down heavily  and exposed their anti-people nature.

It is ironic that it took place on the very day the Naxalabri movement started on May 25th.

All democrats should resolutely stand by the arrested activists and support their just agitation.

Such a movement has great significance in a semi-feudal society and where the dalit community is humiliated.

It teaches us how much importance has to be given to caste analysis,organizing of agricultural labourers  or studying the dalit phenomena

Following a clash between Dalits and the police at Balad Kalan village (near Bhawanigarh) yesterday in which about 15 persons, including five policemen, had sustained injuries, the Bhawanigarh police registered two criminal cases against about 150 Dalits and their leaders.

The police have arrested seven Dalits in a case, registered against over 70 Dalits and others, including Mukesh Malaud, district president of Zamin Prapti Sangharsh Committee (ZPSC), under various Sections of IPC, including 307 (attempt to murder) and 120-B.

This case was registered against them for allegedly “pelting stones” on the policemen at Balad Kalan village etc while blocking the Sangrur-Patiala main road. Seven persons have been arrested.

Deputy Superintendent of Police (DSP), Sangrur, Gagandeep Singh Bhullar, said this evening that four of them were today produced in the court of the CJM here that remanded them in police custody for two days.

According to the Bhawanigarh police, the other case was registered against the agitating Dalits on the complaint of one Bhola Singh for allegedly “issuing threats” and keeping them “detained” in the BDPO’s office at Bhawanigarh after the auction of land.

In this case, the police booked over 75 persons, including 45 who have been named.I just got a report from activist Rupinder Singh of Sangrur and leader of Nuajwan Bhrat Sabha that in many villages protest rallies are being staged within Sangrur district.


These include Khedi,Nizampur,Chenedi,jalur and Mander kalan

The heart of the dalits  are burning like a flame and the resistance against injustice was sporadic.The dalit sit-ins in those villages are a thorn in the flesh of the ruling classes. This agitation is an inspiration and lesson to dalits and agricultural labourers  of India as a whole.
Posted by nickglais on 5/26/2016 04:16:00 AM