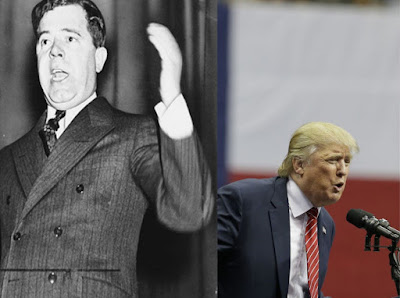 Democracy and Class Struggle is studying the right wing populist and fascist movements in the United States as part of our general study of the universals and specifics of fascism in the 21st century.

Mnuchin was an Investment Professional with Soros Fund Management LLC and spent 17 years at Goldman Sachs. He also has innumerable other affiliations with establishment financial institutions and corporations.

The appointment of a Wall Street insider for the Trump campaign financing combined with support of West Virginia coal miners is a lethal combination.

Fascism, xenophobia, and demagoguery are as American as genetically modified apple pie in the words of Mickey Z here.

He’s the rider on a white horse ?

On the radio a while back, I heard Pat Buchanan, who ran for President as a conservative insurgent twice in the nineteen-nineties, and again in 2000, compare Trump to Huey Long, the legendary Louisiana populist who assailed the rich, the corporations, and the metropolitan élites during the twenties and thirties.

Like Long, Trump could speak to ordinary folk in a language that they could understand and relate to, Buchanan said.

Long was a Democrat, of course, who espoused some policies—such as expanded public services, stricter regulation of business, and higher taxes on the rich—that Trump, in his current incarnation, might well dismiss as socialism.

But there still might be something to the comparison.

Long “spoke so directly to the people, and that is Donald Trump’s appeal,”

“It is a purely personal relationship with his listeners. It is not based on factual issues.”

Of course, the divide between populism and demagoguery is often in the eye of the beholder.

White, who is now the dean of E.J. Ourso College of Business, at Louisiana State University, highlighted Trump and Long’s penchants for dressing in fancy suits and using incendiary language toward minorities.

“The oversimplification of issues is very dangerous, and when you combine that with negativity and fear, the combination is classic populism,” he said.

At least one Republican, Frank Luntz, the pollster and strategist, has also suggested that Trump’s candidacy could be dangerous.

“There’s something happening out there that is profound, but you gotta be careful; when you tap into it you better have a way to direct it,” Luntz told Politico.

GOING BEYOND THE BERN