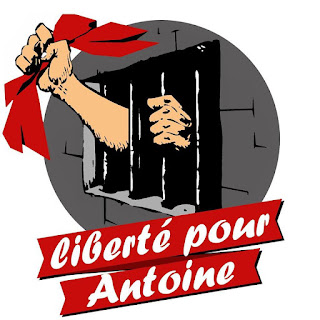 Demonstration in support of Antoine, political prisoner Comrade of CGT(General Confederation of Labour) and member of the Revolutionary  Antifascist Cell of Auvergne (CARA) is in jail pending his trial on May 26.

Let us fight for his release!

On April 29, activists against the reform of labour law and of Night Stand invaded the City Council and demand their right to meet their in Jaude square, as it was forbidden.

They club, they gas, they use tazers... with unprecedented violence.

In the crowd, a speaker fell on the head of the local director of public safety, Marc Fernandez (the head of police).

A comrade, who work as a medic at the hospital of Vichy, was arrested.

Demonstrators are pushed into the streets. They then support the comrade outside the police station.

Today May 2, 2016, Antoine went in immediate trial after a custody which had lasted from Friday night.

He refused the immediate hearing, but was sentenced even before the start of the trial.

He was present at the occupation of the town hall of Clermont-Ferrand by Night Stand.

The prosecutor said "This is not a political trial." Really ?!

This is not a political trial when we lock a person based on a presupposition ?

This is not a political trial when one get a penalty greater than that set by the law?

The law is the scam that one hears in every mouth of nonsense makers, who want us to believe in justice in this world dominated by the wealthy and their state.

But now the masks have fallen.

We all know people who believed in salvation by means of bourgeois democracy. And who can blame them? They fool us us these speeches for nearly 200 years. But in light of this history, who can believe it?

Today, the defense lawyer tried appeasement, held out a hand to social peace, the one that all the advocates of republicanism are selling us.

This hand, the institution's representatives, they spat on it, and simultaneously spit their contempt in the face of those who believe in improving our living conditions by the institution, by law, through elections.

What occurred today is a declaration of war against the social movement against labor reform, against Night Stand, against revolutionary movements, against all those who dare to raise their heads, but it's not only this : it's a repudiation of everything in which millions of people, too careless, have believed for years: the bourgeois justice.

Republicanism is a dead end and has nothing progressive, law is just a tool of domination in the hands of those who knows it to oppress the poor, the people.

There is only one justice, class justice. Today it's in the hands of the bourgeoisie, but appears an horizon where the people will do their own justice and shake the exploiters and murderers! And that day is not so far away.

There is only one salvation, only one perspective : the one of the revolutionary struggle!

Despite the repression, we are stepping up the fight! We will not stop there. Let the authority beware us, as we will never allow ourselves to be intimidated because we made the choice to not live as slaves.

We will make pay a high price to the forces of repression because, for us, resist is to hit back face of oppressors.

They can stop us, lock us up, but they will never silent the revolt who rumbles as we are the proletarian youth, oppressed and exploited.

This revolt is rooted in us, it is the result of what we live every day and it will be the tomb of our tormentors.

The imprisoned comrades show us the path of dignity !

Revolutionary  Antifascist Cell of Auvergne calls to organize and attack all those who dare to touch one hair of the people!

Antoine, we are with you until the end.