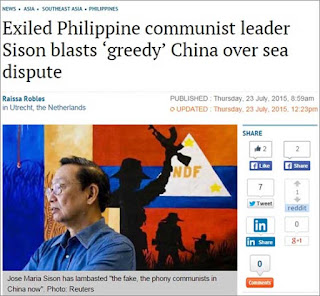 MANILA – The Armed Forces of the Philippines (AFP) has softened its diehard position against Jose Maria Sison, founder of the Communist Party of the Philippines (CPP), whose advocacy for a revolutionary government was in the mind of the presumptive president-elect Davao City Rodrigo Duterte.

Sison has been living in self-exile in Utrecht in the Netherlands since 1986 after he was released from a military prison. He has recently expressed his willingness to talk peace under the administration of presumptive President Rodrigo Duterte.

"I will return to the Philippines if Duterte fulfills his promise to visit me,” Sison was quoted as saying in various reports.

Asked on Thursday (May 12) if the military would arrest its Public Enemy No. 1, Lt. Gen. Glorioso Miranda, acting AFP chief, could not gve a categorical answer.

"Well, the best answer for that is, as you said, we’ve been fighting for democracy and it’s a democratic country," he said. "Lahat ng tao, kung ano man ang karapatan dapat gawin ay gagawin nila. We cannot comment on that."

He repeated the usual "media line" that the military would always support the peace process with the New People’s Army (NPA), the armed component of the CPP. The negotiating arm of the CPP-NPA is the National Democratic Front (NDF).

"Well, the AFP, from the very start, has been very active dito sa peace process," Miranda said. "Tulad nga nung sinabi ko nung nag assume ako na acting chief of staff of the AFP, the first best option in conflict resolution is always through the peaceful means. Yun lang ang masasabi ko. That is the stand of the AFP: Best first option is a peaceful process."

During his campaign sorties, Duterte said he would declare a revolutionary government if he should win the presidency. He said it was  only way to end corruption in government and criminality.

Earlier, the AFP said it was bound to support whoever would be the legitimate commander-in-chief.

"The AFP, as professional military organization, respects the choice of the Filipino people and will remain solid behind the Constitution and our democratic institutions," it said.

"We will follow our commander-in-chief and will implement the new president’s peace and security policies, especially those that will bring the conflicts that ail the country for decades to their just end,” it added.

Many believe that Duterte would order the release of all political prisoners languishing in jail with multiple charges, including trumped-up charges filed at different courts as confidence building with the CPP-NPA to seriously face the government at the negotiating table.