INTERVIEW WITH PROF. JOSE MARIA SISON ON THE ELECTION OF DUTERTE AS PRESIDENT 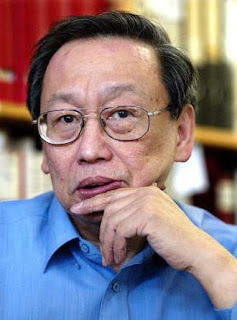 By Angel Tesorero
Correspondent of Khaleej Times
Dubai, UAE
May 10, 2016

Is this a protest vote against the current administration? Did the Left contribute to Duterte's win?

JMS: Duterte became a landslide winner because he responded to the people's clamor for change and voiced out their protest against the Aquino regime, its corruption and criminality, especially the widespread drug trade. He captured the protest vote because he clearly and strongly opposed the Aquino regime and its presidential candidate Mar Roxas.

The Left contributed to the victory of Duterte because it opposed the US-Aquino regime strongly and for a long time against its puppetry, corruption, brutality and mendacity. But the Grace Poe Independent Party chosen by the Makabayan Coalition was soft on the Aquino regime even if it was occasionally critical of some Aquino cabinet officials during the campaign.

2) You said you are planning to return should Duterte win, when will this happen?

JMS: I will return to the Philippines if Duterte fulfills his promise to visit me. I must be sure of the substantial grounds for my return home. I can easily return home if Duterte releases all the political prisoners unjustly imprisoned by Arroyo and Aquino in violation of the Hernandez political offense doctrine and JASIG and if there is an agreement on mutual ceasefire, cooperation and the acceleration of the peace negotiations to address the roots of the civil war.

3) Duterte was your student (in Lyceum, which subject?); he was a member of KM and he said he will be the first Leftist/ Socialist president - how was he as a student? He said he's an anti-oligarch, did you personally contribute in the molding of his political views?

JMS: He was my student in Political Thought in the Lyceum of the Philippines in the late 1960s. He became a member of the Kabataang Makabayan. He describes himself as a socialist and promises to be the first Left president . He talks against the oligarchs. As a student, he was modest and laid back but he learned much. He himself told me so. I am very proud to have a part in his political moulding against imperialism and the local oligarchs. I hope that he will actually serve the Filipino people in their fight for national liberation, democracy, social justice, development

4) Did you personally congratulate your student after you've learned of his impending win?

JMS: Yes, I congratulated him through Arlyn dela Cruz, news director of Radyo Inquirer, and Sonny Mallari of the Philippine Daily Inquirer. They interviewed me as soon as the results of the exit polls became known and the Comelec count showed the strong trend in favor of Duterte.

5) How do you think will the progressive movement (Makabayan bloc in Congress) deal with a Duterte presidency? How will the revolutionary forces also deal with him?

JMS: I think that the Makabayan bloc will support all the patriotic and progressive policies and acts of the Duterte presidency. I hope that there will be a government of national unity, peace and development. The revolutionary forces will be very often in touch with Duterte after an agreement is made on mutual ceasefire, cooperation and acceleration of peace negotiations is made. We shall have reciprocal advisors and liaison officers.

6) What are the prospects of peace talks between a Duterte administration and the NDFP? What should he do to address social and economic reforms, peace and order, social justice?

JMS: The prospects seem to be bright at the moment. But Duterte as well as his negotiators should meet with the NDFP representative as soon as possible. There should be comprehensive agreements on social justice and economic reforms as well as on political reforms. The NDFP immediately supports the campaign of Dutere against corruption and criminality. We look forward to the arrest and trial of Aquino, Abad and other corrupt high officials and the eradication of the drug trade and kidnapping for ransom.

7) Duterte rode high on the issue of anti-criminality (actually, for OFWs this is their number one concern, based on my interviews with them), but his opponents are projecting him as a punisher and a dictator-in-the-making. Do you think Duterte will resort to an iron-fist rule? He's campaign salute/ sign (clinched fist, ready to punch) might be seen as a conditioning for an iron-fist rule.

JMS: I think that the campaign against criminality can be carried out without violating due process and other human rights. Only those armed and dangerous suspects who violently resist arrest can be killed by the arresting police units. Duterte has repeatedly made this point clear. He has even taunted the racist policemen in the US for whimsically killing blacks.

8) The OFWs (and I can say in particular for our kababayans in Dubai) are ecstatic over Duterte's win. Why do you think Duterte is popular among OFWs? There was no political party nor machinery but OFWs volunteered to work for Duterte's campaign. Some people have even taken a month off to serve as poll watchers during the month-long Filipino overseas voting here in Dubai

JMS: Duterte was able to capture the protest sentiment of the electorate. The people have been long fed up with the Aquino government, the corruption and rampant criminality. That's why there is magnetism between Duterte and his followers. That is also true with his followers among the OFWs in The Netherlands.

9) On another note, what can you say about Bongbong Marcos' "strong showing" in the elections?

JMS: Bongbong was strong for a while because he also opposed the much hated Aquino regime. But Leni Robredo was also effective in condemning the brutality and corruption of the Marcos fascist dictatorship and the complicity of Bongbong Marcos in hiding the billions of dollars stolen by Marcos from the people. She demanded from him the return of the loot to the people.

10) People here who voted for Duterte voted either for Cayetano (because he is the running mate) and Marcos (because they also see him as strong leader). Why do voters have this kind of view?

JMS: I have already pointed out that Bongbong Marcos benefited from a strong opposition to the Aquino government. One more thing: he had more financial resources than Cayetano in propagandizing himself. Cayetano also did not focus on himself but on defending Duterte from attacks.

11) Do you honestly think you can come home? There are several 'rightists' in Duterte's camp, and he even mentioned former general Esperon will be included in his cabinet?

JMS: I have already said before that I must be sure first of the substantial grounds for my return home. I will not dive into any situation in which the Duterte government is still unsettled and there are unwieldy elements who are inside or outside of that government and who violently oppose my homecoming.

I am most useful abroad in the negotiation of the comprehensive agreements on social, economic and political reforms.

12) And finally, how will you compare Duterte to Trump (some media entities are calling Duterte as the Asian Trump); and Duterte to socialist presidents in Latin America.

JMS: Instead of analyzing any kind of name calling relative to Duterte, I would rather test and find out soon how far he can serve the best interests of the Filipino people. I give him the benefit of a doubt when I prefer to wish that he proves himself Left ala Hugo Chavez. I also enjoy much of his sense of humor but not necessarily all his jokes.

Please feel free to add more, if you think I missed anything.

JMS: You have already asked many questions. Thank you.
Shukran (thank you in Arabic), Prof. Sison