US Hegemony in Latin America by Jesus Rojas : On August 5th, 1829 the Liberator, Simon Bolivar proclaimed. "The United States appear to be destined by Providence to plague America with misery in the name of freedom" 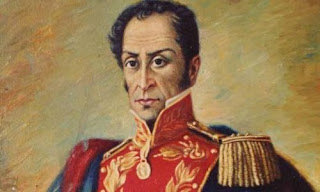 Bolivar  pointed out the expansionist, interventionist and warmongering policy that has characterized the USA since it gained its  independence from British colonialism in the year of 1776.
Already at that time the "imperial eagle" was raised as main objective, the conquest and domination of the entire American continent.

It was precisely Simon Bolivar which exposed the annexationist claims of the United States, which fiercely opposed to the independence of Cuba and Puerto Rico.

These actions were carried out under the development of American capitalism and its constitution as an imperialist power.

The purposes of US administrations  were and still are to  militarily dominate the continent, to seize the natural resources of the region, to maintain control over the means of land, river and sea transportation  and set line policies related to their interests for which they would use oligarchs regimes - constituted by the nascent Latin American bourgeoisie, by large landowners, military and conservative sectors of the church, which were characterized as puppets of the imperial eagle as well as the brutal application of violence, in some cases, and surreptitious manipulation in others.

With the implementation of policies such as the FTAA the US are seeking to leverage hegemonic control and appropriate the surplus sources of primary activities in Latin America.

Through this agreement the US seeks to institutionalize the instruments of  control of  police  and military type in the region; accentuate the pillaging of natural resources (minerals) on the continent, racist way regulating migration flows; extending the free flow of capital, but preventing the free labor market; destroy the incipient industrial production chain and the countries of the region, privatize oil, water and biodiversity; maintain control of scientific investment in the region, among others.

The actions undertaken by this country to ensure its hegemony in the global economic order, have meant perverse effects on the political, diplomatic, military, economic and cultural level among the countries of Latin America.

Since the proclamation of the Monroe Doctrine, the United States has had as main objective to control the new independent Latin American markets and close to English merchants and European interests.

The imposition of this neo-mercantilist imperialism led to explosive social conditions and the reemergence of nationalist and socialist alternatives; and the anti-terrorist military doctrine of Washington, with its threats of violent interventions and its active and direct military presence has served as a useful ideological weapon to impose such empire.

In recent years Latin America has remained resilient to the will of Washington and has obtained a series of victories whose background so far is not fully identified by the US.

First it can be mentioned Latin American organizations such as the Union of South American Nations (UNASUR) and the Community of Latin American and Caribbean States (CELAC).

Besides that, Latin America currently has all the necessary requirements to solve internal problems without outside help and without the US, causing its strong indignation.

An independence of this nature does not fit into the overall plans of Washington, which has to maneuver and invent various scenarios for each country in an attempt to somehow keep relations with its neighbors.

The resistance of countries like Venezuela, Ecuador, Bolivia, and Brazil despite the coup, to the capitalist imperialism that leads us to imagine an imperial structure with cracks that expose the weaknesses of the hegemony of the United States in the Global order  and ask ourselves  what will be  the actions of that country to maintain control within the capitalist system.