Donbass : Myths and Realities and the Role of Communists by Dmytriy Kovalevich 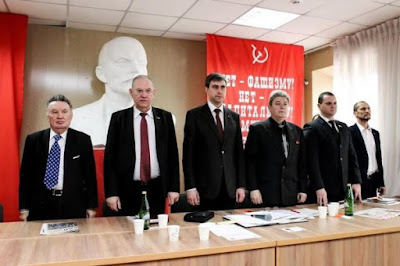 Democracy and Class Struggle has heard conflicting reports from Donetsk and Lugansk about situation of comrades.

To clarify the situation for readers of Democracy and Class Struggle we have asked comrade Dmytriy Kovalevich for clarification of the current situation in Donbass.

We know that West governments for two years blackmailed Moscow demanding to take measures and press Donbass rebels as they couldn’t press them by Kiev troops.

Although, we can’t know the plans of Moscow for sure, but definitely Russian government is not as united as it is portrayed by West press: it has several factions with their own vested interests and it is the internal Russian political struggle causes contradictory decisions over Donbass and Ukraine.

The policy of Moscow is (and has been since Maidan) is rather determined by a desire to have Donbass inside Ukraine and Russian officials stated it quite clearly, by the way.

Russia doesn’t want a seceded Donbass (dependent on Russia and a burden on its budget) - it would like to see it inside Ukraine as a counterbalance to Kiev nationalists and a leverage to influence the policy of entire Ukraine.

The difference between Moscow and Kiev approach is not over Donbass status as such (both governments are agree over it), but Kiev wants a military victory and to expel local Donbass people to Russia, while Russia can’t allow this scenario to happen and would like to see a strong Donbass with its people inside Ukraine.

The opinion of Donbass people is effectively ignored by both sides (Moscow and Kiev).

Russian government (threatening to stop humanitarian aid) made Donbass rebels in 2014 to stop their advancement (when they nearly seized Marioupol and even entered Zaporizhya region).

Moscow also tries to force them to fulfill Minsk agreements.

But the problem is that Kiev and Moscow differently interpret the Minsk agreements.

Currently, the leader of DPR A.Zakharchenko is outraged that Moscow presses them to postpone the elections in DPR - for the third time (Moscow doesn’t want Donbass elections to be held, but would like Donbass people and organisations to participate in all-Ukrainian elections, while Kiev would like to forbid ‘the terrorists’ participation’ in Ukrainian elections).

As to the issue of Donetsk communists. I should remind that still Donetsk Communist party is the only (!) political party officially registered in DPR.

There are no other political parties there (only newly formed movements and civic organizations).

There is still no definite law on political parties and their registration (Moscow as usual doesn’t allow the local political sphere to be formed, as it sees Donbass in Ukraine).

The registration of Donetsk communists is seen, thus, as a ‘mistake’ to be corrected.

Some think that this began from the comment said by the former Ukrainian president L.Kuchma during Minsk negotiations over the prospect of elections in Donbass:

“You have in Donetsk an officially registered Communist party, but you are not going to allow our parties to participate in the elections in Donbass!”.

After that there began attempts to ‘correct a mistake’ – that is: no registered parties at all - so, no possibility for Kiev parties to participate in Donbass elections.

Officially Donetsk Communist Party is included into the movement ‘Donetsk Republic’ (headed by A.Zakharchenko) - actually it’s a ruling block (not a party).

In May 2016 two deputies of the Communist Party of Donetsk were excluded from the Donetsk council under pretext that they didn’t followed the block’s discipline and voted not as was agreed by the entire faction in the Parliament.

However, unofficially Donetsk politicians say that this is the instruction from Moscow - to ‘suppress communists’ so that to remove a potential argument from Kiev in negotiations.

Apparently this happens because Donetsk communists were the initiators of the Donbass uprising - all began from their rallies to defend Lenin’s monuments two years ago and seizing administrative buildings in the region.

B.Litvinov (the head of Donetsk communists) was the main organizer of the referendum on Donbass independency.

“Whatever happens, but the DPR still follows the instructions from Moscow, and one should not try to find in the exclusion of Litvinov a sort of persecution of Communists.

His removal does not mean any prohibition of the Communist party. To ban the Communists in Donbas is impossible.

Moreover, the Communist party officially registered in DPR, just in current circumstances can not participate in the elections in the interests of the process [i.e. Minsk agreements].

And the fact that the Communist party is the first and the only party that managed to register in DPR, says only that the support of the Communists in the industrial Donbass is very high.”

Currently there are two main political forces in DPR: the movement “Donetsk republic” (headed by A.Zakharchenko) which nominally includes Communist party and the movement ‘Free Donbass” headed by Pavel Gubarev [former activist of the Progressive Socialist party of Ukraine].

Both movements have a significant number of pro-communist and pro-workers groups and activists included.

The communists and pro-communist activists are the most committed militants in Donbass and apparently Russian authorities see them as an obstacle to get rid of Donbass (which needs support) and re-integrate it into Ukraine (though, it’s rather a speculation since no one knows real plans of Moscow and how much it will bend to West demands to press the rebels).

Obviously there is no suppression of the communists in Donbass like in Ukraine.

The problems of Donetsk communists are rather a matter of internal tensions within ruling block [apparently resulted from Moscow pressure which is the result of west pressure] as communist insist on independency and don’t tolerate Kiev regime.

However, we should understand that the West presses [formally] Kiev to get rid of notorious Nazis and Kiev promises but actively sabotages this.

Moscow presses Donbass to get rid of most militant antifascists - in the name of the ‘peace process’] and Donbass promises but actively sabotages this too.

Kiev says: if there were no communists, there would be no separatism.

Donbass says: if there were no Nazis [Banderites] in Kiev, there would be no separatism and attempts to secede.

Nazis in Kiev have influence mostly via their force [paramilitary groups]  - not via electoral representation and they can’t tolerate communists.

Communists in Donbass also have a presence rather not in Donbass administration but in rebels’ units and they are not agree to tolerate Nazis [Banderites].

Recently, Donetsk officials tried not to allow Donetsk communists to march but Donetsk armed rebels intervened and officials had to concede.

In Kiev some officials tried not to allow Nazis to march but their armed paramilitaries intervened and the officials had to concede.

However, the main war is still between Nazis and Communists and other forces have to follow them and try somehow to influence the situation.

Attempts of some leftists to equate the situations in Kiev and Donbass are largely caused by the desires of pro-west liberals and Ukrainian nationalists to respond somehow to the accusations about communist ban in Ukraine and constant Nazi assaults on Ukrainian communists.

I should emphasize: Communist Party in Donetsk is still the only acting registered political party.

As for Lugansk - the communists there are even more numerous, though there are political tensions with the LPR leadership too (as well as between pro-communist groups).

I should remind that the first armed resistance to Maidan coup was an attack of Lugansk communists on Ukrainian border guard aimed at seizing weapons.

In short, communists are the most active and militant force in Donbass, what some see as an obstacle for Minsk agreements and re-integration of Ukraine.

As for the prospects of the conflict: we see that civil war still goes on - at least shelling happens daily.

But no side still can advance significantly. Donbass waits for the economic collapse of Ukraine, while Ukraine relies on pressure from West so that to integrate Donbass on Kiev terms.

Moreover, Kiev Nazis are also dangerous for Kiev regime so they are being sent to the frontline - to fight and die somewhere - far from Kiev.

Ukrainian Nazis are not pro-EU or for ‘European values’ but need Western aid to fight communists so they are ready to blackmail it by ‘Russian aggression’.

Communists in Donbass are not pro-Russian - rather they try to impose their agenda to Russia, blackmailing Russian officials by a possibility to lose their domestic support.

From one side it’s a sort of a proxy war between Russia and West, from another side - a civil war.

And agendas of internal and external actors don’t coincide.

I think we’ll see a sort of frozen conflict with regular shelling - at least until presidential elections in the USA - and after that the conflict may be escalated again.

At the same time Kiev regime quickly loses the popularity as it has to implement unpopular IMF austerity measures.

The internal tensions in Kiev grow but still the regime can survive only due to West financial aid – as soon as it stops, the regime will collapse.