CPP to Miriam: NPA does not support Duterte nor any other candidate 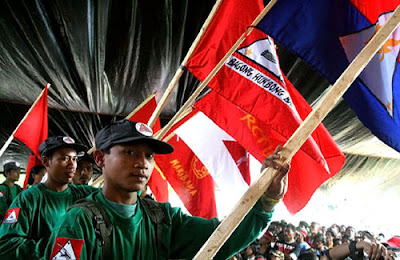 The Communist Party of the Philippines (CPP) reiterated today that it does not participate in the elections of the Government of the Republic of the Philippine (GRP) nor does it endorse or support any of the presidential candidate.

The CPP issued this clarification in reaction to statements yesterday by Sen. Miriam Defensor-Santiago that presidential candidate Davao City Mayor Rodrigo Duterte is the “official candidate” of the New People’s Army (NPA).

“Contrary to Senator Santiago’s claims yesterday, Mayor Duterte is not being endorsed nor supported by the Party or NPA,” said the CPP.

The CPP also dismissed reports by the Armed Forces of the Philippines (AFP) that NPA members in Samar are campaigning for Duterte. “These are pure lies.”

“Indeed, Mayor Duterte has espoused certain advocacies that strike a chord among the Filipino people and their national democratic forces, including calling for peace negotiations to address the roots of the armed conflict,” pointed out the CPP.

“Duterte has mostly styled himself an anti-crime crusader, a socialist and radical in an effort to win over the people who long have been disillusioned with the rotten ruling system,” notes the CPP.