The True Origin Of ‘American Exceptionalism’ by Nataniel Downes 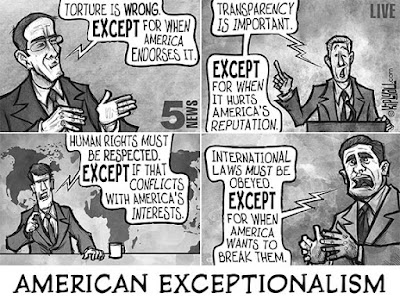 Democracy and Class Struggle expects to meet the idea of American exceptionalism on the political right but as this article shows its real origins were on the political Left with Jay Lovestone.

We would also like to point out that this ideology fits well with the US Imperialist post war ideology with the far more developed idea of cosmopolitanism which we have exposed here on Cosmopolitanism and Imperialism which assumes US domination of the world in its promotion of national nihilism for others but American exceptionalism for itself.

Therefore is comes as no surprise to us to find this idea in its cosmopolitan - national nihilist form appearing on the US Left Today.

In stump speeches and lectures given by Republican candidates for
several cycles now, we have heard them bat about the term “American
Exceptionalism” multiple times. They tout it like a flag, boldly and
proudly,  proclaiming it as a status of greatness. When asked, they
inevitably give credit for the term to Alexis de Tocqueville, a French
aristocrat who wrote the book Democracy in America.

The problem is that the phrase “American Exceptionalism” does not appear
anywhere within that book. In fact, the term does not exist anywhere, until 1929.

In 1929, the phrase first appeared, in a letter to the head of an
American political party from the head of a foreign state. Which party
and what state? Democratic from France? No. Republican from Britain? No.
The letter was to one of the leaders of the Communist Party USA, Jay
Lovestone. And, it was from the Soviet Union’s General Secretary, Joseph
Stalin.

Jay Lovestone sent Stalin an explanation as to why workers in the United
States were not inclined to engage in widespread civil disobedience, and
that the general rules of industrialization did not appear to cause them
as much discomfort as it did their counterparts in Europe. He said in
effect that America was an exception to the economic rules that the
Bolshevik’s had built their own models upon. In effect, America’s still
expanding frontier, and that it was still growing, meant that the usual
rhetoric and explanations did not resonate with the people of the United
States.

In response, Joseph Stalin replied back that there was an “American
Exceptionalism” in place. Not that America was “exceptional,” but that
America viewed itself as the Exception to the established order. The
Communists used the phrase in rhetoric and speeches, about how America
felt it was the exception to the rules.

Joseph Stalin believed that eventually it too would discover that the
same rules over the economy still applied – a prophecy which came true
only weeks later when the crash led to the Great Depression. And in a
dire warning, the Soviet leader strongly felt that in an attempt to
cling to this belief in an exception, the United States would eventually
turn imperialistic, and become a military menace to the world in order
to prove its exceptionalism.

But, aside from the use by the Communists, the phrase had been
forgotten, a minor note in campaign rhetoric, and there would have
stayed Joseph Stalin’s little contribution to American identity if not
for the New York Times. In 1980 the times ran a piece using the term
pleading with both President Carter and then GOP nominee Ronald Reagan
to defend that exception, saying it made the United States unique. And
so began its entry into mainstream politics.

Even then however, it was rarely used, until 2011 when suddenly it began
appearing in every political campaign speech almost overnight. While it
was used only a few hundred times from 1980-2000, after 2010, it
appeared on average five times per day within major publications or
speeches, and the rate continues to accelerate. It is rare to go through
any political rally, stump speech, or news show talking head without
stumbling over the phrase “American Exceptionalism.” And the majority of
these it turns out are Republican candidates or pundits.

So, this little letter from Joseph Stalin, criticizing America’s
arrogance to believe that we were above any rules, is now being batted
about as a positive thing. The irony would likely not be lost on the man.

If anything else, it underscores that America is not exceptional, but
that we are deathly afraid. As we have lost our status in the world
through misguided wars against unarmed nations and revealed ourselves
not as the world’s police force, but the world’s bully, American
Exceptionalism means nothing less than an admission of our fear to the
end of Pax America.

Indeed, yes, the father of American Exceptionalism, Joseph Stalin has
gotten the last laugh after all these years.