India : Letter from intellectuals on unjustified incarceration of G.N. Saibaba to Chief Justice of India 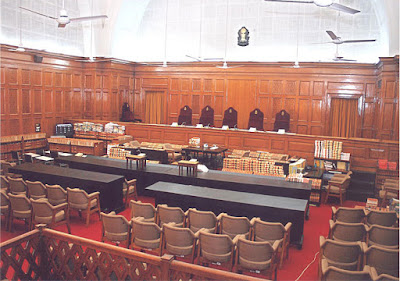 To The Chief Justice of India, Supreme Court

More than a year passed since we wrote to you appealing to release the Delhi University Professor Dr Saibaba, who was clandestinely abducted on 9th May 2014 by the Indian police. Since then, this 90% disabled wheelchair bound intellectual is being incarcerated, confined in a highly unsanitary and solitary dark cell in Nagpur Central Jail in the state of Maharashtra, hundreds of miles away from Delhi, where his family lives. Charged with the draconian black law, the ‘Unlawful Activities Prevention Act’ (UAPA), he has been denied bail thrice by the Indian judiciary. We understand that his trial has not started even after a year!

We the undersigned would like to express our general concern over the Indian government’s increasing use of unjust laws to silent its political opponents. Particularly, the draconian Unlawful Activities Prevention Act (UAPA) is being used indiscriminately to silence dissenting voices. This blatantly violates the Constitution of India as well as principles of Human Rights. Wide-ranging powers and legal impunity have been given to the police and paramilitary forces under this Act. The Ministry of Home Affairs (MHA) has reportedly issued instructions that those who raise issues of human rights violations must be targeted and arrested, particularly in central and eastern India, where there are numerous struggles against displacement from mining and mega dams.

We would like to remind you that India is a signatory to the International Covenant on Civil and Political Rights (ICCPR), which it ratified on April 10th, 1979. Its Article 9 protects every individual from arbitrary arrests and detention, their right to be informed of charges against them and fair and speedy trial. Article 7 says “no one shall be subjected to torture or to cruel, inhuman or degrading treatment or punishment”; articles 18 and 19 protect the freedom of thought, conscience and expression of ideas; article 26 protects everyone against discrimination.

Dr Saibaba is a well-known human rights activist in the Indian subcontinent and beyond. He has been a vocal, important critic of the Indian state’s ‘development’ model and its great damage to the people who supposedly benefit. He has successfully exposed to the outside world the role of the multi-national corporations in grabbing the land, forests and rivers that belong to the indigenous population. He is one of several intellectuals who have drawn attention to the blatant human rights violations against the indigenous peoples of central and eastern Indian states, where the Indian paramilitary forces have been engaged in an unjustified war with India’s own people, infamously known as ‘Operation Green Hunt’. His persistent criticism has made him a high-profile target of the Indian State.

Dr Saibaba is, curiously, treated as a security threat by the Indian State, even though he is a wheelchair-bound disabled person who suffers from 90% disability and post-polio residual paralysis of both lower limbs. He suffers from heart ailment and degeneration of his spine for which he needs constant medical attention. On 26th June 15 ‘The Indian Express’ reported Saibaba’s wife Vasanta, who was only allowed five times to visit her husband during the past one year, fears that she was not sure if her husband will come out of prison alive. His health has further deteriorated over the past one year of his imprisonment. A news report by ‘Nagpur Today’ reported that according to the health report submitted by Chief Medical Officer and the superintendent of the jail to a Gadchiroli court last month, wheel-chair bound Saibaba “is now a known case of systemic hypertension with ischemic heart disease” and also has kidney and gall-bladder stones.

Despite knowing about his fragile and critical physical condition, the Indian courts have rejected his bail three times. Why? We wonder whether the Indian judiciary is afraid that this wheelchair-bound person, if released on bail, might jump bail or will be in a better position to influence the trial, which has not even started.

Given that Indian prisons are crowded with 300,000 defendants awaiting trial, there is a need for a fair criminal justice system that either prosecutes or releases detainees. Such an intervention can come only from a Superior Court. We appeal to you for the judicial protection of all such critical voices, by stopping the criminalisation of dissent.

Given that Dr Saibaba clearly poses no flight risk whatsoever, we appeal to you to release him immediately from the judicial custody so that his family can provide him necessary medical treatment which he desperately needs.

Taking into suo moto cognizance of a news report on Dr Saibaba’s deteriorating health condition and a letter written by Human Right’s activist Purnima Upadhayay, Bombay High Court granted him temporary and conditional bail for three months on 30/06/2015, allowing his family to provide medical treatment. According to media reports, one of the bail conditions is that he should refrain from using laptops and computers when on bail, which means he cannot communicate with the outside world about what has happened to him during his imprisonment. The reports also suggest security forces will be stationed outside his house, which could mean house arrest effectively. It is shocking breach of domestic and international law that wheras it is Dr Saibaba’s treatment in prison that has led to medical complications in his condition, he has been granted bail for a limited period of only three months, giving his family just enough time to nurse him back to health after which he will be taken into custody again subjecting him once again to health complications arising from his disability. This treatment of a political prisoner amounts to renunciation of legal obligations of the state to provide treatment and care to prisoners.

We regret India being a signatory to the United Nations Convention on the Rights of Persons with Disabilities, has imprisoned a 90% physically disabled intellectual for more than a year in a solitary confinement without conducting trial. We request your Honour to restore the fundamental rights granted to Dr Saibaba by the Constitution of India and convert his temporary bail into a permanent one and give him a fair trial in Delhi, where his family lives.

Prof. Bill Bowring, Professor of Law, Birkbeck University School of Law, and President of the European Association of Lawyers for