Interview with author Aaron J. Leonard on the largest Maoist organization to arise in the US — from its origins in the explosive year of 1968, its expansion into a national organization in the early seventies, its extension into major industry throughout early part of that decade, the devastating schism in the aftermath of the death of Mao Zedong, and its ultimate decline as the 1970s turned into the 1980s.

From its beginnings the grouping was the focus of J. Edgar Hoover and other top FBI officials for an unrelenting array of operations: Informant penetration, setting organizations against each other, setting up phony communist collectives for infiltration and disruption, planting of phone taps and microphones in apartments, break-ins to steal membership lists, the use of FBI ‘friendly journalists’ such as Victor Riesel and Ed Montgomery to undermine the group, and much more. It is the story of a sizable section of the radicalized youth of whose radicalism did not disappear at the end of the sixties, and of the FBI’s largest — and up to now, untold — campaign against it. 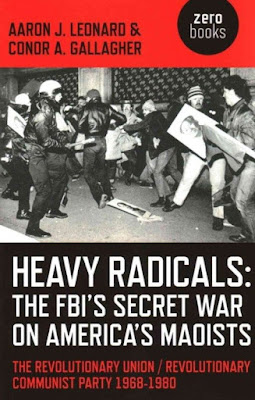 A new account of American Maoism and its peculiar impact on the protest movements of the USA in the 1970s and 1980s. "Heavy Radicals" provides a rare insight into the motivations and political culture of a fringe culture on the American Left. ~ Left Futures, Mark Perryman

Heavy Radicals is an excellent addition to the literature on the history of revolutionary groups which played important roles in the 1960s and 1970s. It is the first comprehensive and complete history of ... the Revolutionary Union. It is a well-researched book which fills the gap created by the absence of historical literature on an important period in the history of the United States. ~ Sarah Kahn, The Washington Book Review

Heavy Radicals: The FBI’s Secret War on America’s Maoists-The Revolutionary Union/Revolutionary Communist Party 1968-1980 recovers a “lost” but crucial portion of the history of the New Left of the 1960s and 70s. Co-authors Aaron J. Leonard and Conor A. Gallagher masterfully chronicle the tumultuous history of the leading Maoist group in the United States and the government’s attempt to crush dissent under an iron heel. ~ Mike Kuhlenbeck, Eurasia Review

His personal experiences, in concert with a wealth of archival materials and FBI files, give the book gravitas..."Heavy Radicals" is at its best when focused on the ways the US government worked to sabotage the RU and RCP. ~ Eleanor Bader, Truthout

The story of the RU-RCP in the period covered by Leonard and Galagher is one of dedication to revolutionary principles and social justice. It is a commitment based on an understanding of the fundamental injustice of monopoly capitalism and imperialism, and evolved from years of political organizing trying to change that dynamic. It is set in the context of a period that saw the murderous war in Vietnam result in a victory for the Vietnamese; an antiwar and antiracist movement made of US students and working people of all races rise to victorious heights and then retreat; and a government in Washington determined to maintain and expand its power over the planet. It is a story of committed political radicals willing to give up their previous lives for revolution. Furthermore, it describes the dangers of factionalism and the pitfalls of dogmatism. The years portrayed in the text were also years of intensified police repression countered with growing cultural and personal freedom. Heavy Radicals does an exceptional job in layering these and other aspects specific to the times into a history well worth the read, even if you aren’t a historian (or a Marxist). ~ Ron Jacobs, Counterpunch

Leonard and Gallagher's historiography reads as a grand political tragedy: it is the story of an organization that, despite significant state interference, temporarily became the primary force of revolution in the United States, and then, also despite state interference, imploded and became a marginal grouplet. Apprehending this tragedy should provide the contemporary left with several useful lessons. ~ Joshua Moufawad-Paul, Marx & Philosophy Review of Books

Based on impeccable research, Heavy Radicals explores the rise of the Revolutionary Communist Party in the late 1960s and 1970s. Militant Maoists, dedicated to revolutionary class struggle, the RCP was one of many organizations that fought to carry on the 60s struggle for radical change in the United States well after SDS and other more well known groups imploded.  Leonard and Gallagher help us to understand how the RCP's revolutionary ideology resonated with a small group of young people in post-1968 America, took inspiration from the People's Republic of China, and brought down the wrath of the FBI. ~ David Farber, Author of The Age of Great Dreams: America in the 1960s

Heavy Radicals is a concise and insightful history of a long-forgotten but vibrant radical movement. Leonard and Gallagher break new ground in revealing the extent to which law enforcement will go to infiltrate, destabilize and ultimately destroy domestic political organizations that espouse a philosophy counter to the status quo. To better understand the current state of domestic surveillance and political repression, from Occupy Wall Street to the Edward Snowden revelations, start with this little gem of a book. ~ T.J. English, Author of The Savage City

Meticulously researched, drawing on both internal documents hiding in plain sight and a wealth of information gained through laborious freedom of information requests, Heavy Radicals is a great example of history of the near past -- in examining how the FBI acted, we are better able to understand the methods employed in undermining dissent today. ~ Eveline Lubbers, Author of Secret Manoeuvres in the Dark: Corporate and Police Spying on Activists

In this masterfully written and extensively researched book, Aaron Leonard with Conor A. Gallagher offers a no-nonsense critical analysis of one of the most resilient, misunderstood, and controversial anti-capitalist organizations of the last fifty years. This book is a MUST READ for anyone invested in nuancing their understanding of revolutionary political struggle and unrelenting state repression in the United States. ~ Robeson Taj Frazier, Author of The East Is Black: Cold War China in the Black Radical Imagination

In this untold and highly accessible history of Sixties radicalism, Aaron Leonard and Conor Gallagher expertly guide us through the world of the Maoists who picked up and maintained the activist cause well into the seventies, long after others had collapsed. Fascinating!” ~ Rick Shenkman, Founder and publisher of George Mason University's History News Network

The Democracy and Class Struggle view  the attacks on the Black Workers Congress by Revolutionary Union RCPUSA   as fundamental to the formation of their bourgeois cosmopolitan view of the world and we agree with Aaron Leonard that this attack  on Black Workers Congress was also manipulated by FBI to prevent creation of a much bigger and united revolutionary movement.

No rectification no road to Revolution.

The bourgeois cosmopolitan  worldview continues to dominate all streams of US Maoism with a few rare exceptions.