The Social cleansing of London By Comrade Ollie C 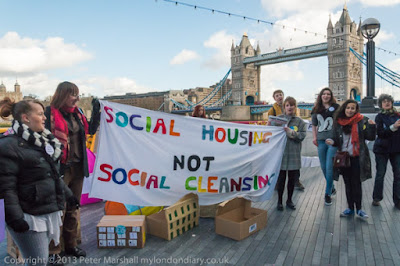 The working class areas of London are now under attack from the capitalist class as they seek to turn the capital into a haven for big landlords and investors from all over the planet. What passes as ‘affordable housing’ in London today is affordable only to the wealthier members of the middle class and the rich.

Working class people are either driven out into far away cities and towns and forced to seek alternative employment (if indeed they can get any) or crammed into inadequate private rental accommodation, not to mention the migrant workers forced to live in shanty towns now springing up throughout London and the outskirts.

Property prices are being pushed up so high that the real beneficiaries are the big landlords and estate agents who buy up huge swathes of London. Many properties are left empty, becoming a savings fund for their rich owners hoping prices will rise even further and they can then sell them to developers.

This inflation of property prices is reaching bizarre heights, for example last year a hovel of a basement flat in classy Kensington was on the market for a staggering £600,000!

Zone 1 and 2 of London are now uninhabitable for most working class people, those who do remain often share sometimes two or more to a room.

The mass sell-off of local authority homes which were never replaced now means that many estates which were once home to working class communities are now populated by the middle class of the financial sector or being smashed up by property developers to build flashy new flats.

In reality the majority of newly built properties will never be bought by those living in them, the big landlords buy them up as a property portfolio and rent them out at exorbitant rents, often to professionals or to a large group of people to share.

The fact you could lose your job, be out of work and penniless is of no concern to these parasites. Even worse investors now purchase entire blocks of housing not to rent but to keep as a safe investment.

Labour controlled Lambeth council has big plans for what it calls ‘re-generation’ of Brixton and Vauxhall, in reality it is a collusion with developers and construction firms to build expensive apartments, office tower blocks, opulent hotels and shopping areas for the big high street chains.

There is the minimal of social housing and small shop keepers will be burdened with ever spiraling rents until they move off.

It is with this background that trade unions, socialists and community groups organised ‘Reclaim Brixton’ on the  25th April as a show of strength against the rapacious investors, developers and town hall bureaucrats.

Brixton has had a history of resistance to capitalist oppression, in particular as a response the racism of the British imperialists state. In 1981, 85, 95 the oppressed black youth of Brixton joined by their white comrades rose up against police terror and racist employment discrimination by capitalists.

This community which suffered oppression due to the ethnic diversity and poverty of its residence has had strong class solidarity which had to be broken by capitalism. Brixton has been plagued by police terror against black workers and youth, not for nothing is Brixton Police Station known by locals as the ‘lynching house’.

However the solidarity could not be destroyed but now it is under threat from the developers driving the working class and poor out, many black workers will be pushed out and the African and Caribbean cultural heritage of Brixton will be destroyed.

In the short term the only beneficiaries will be the better off middle class who will repopulate these new ghost towns and in the long term the investors, developers, and landlords.

The working class and shop keepers will not surrender without a fight! The decades of solidarity cannot be broken in one swoop by the landlord capitalists!

The Reclaim Brixton event will occupy our public spaces again, for the use of the working people as they wish!

The ongoing occupations of abandoned homes across London which started with the courageous E15 mothers in Stratford shows the way.

As part of the struggle against capitalism we need mass occupations to avoid the eviction of tenants by landlords whether private or ‘social’ and we need to take the power from the state and defend our class against their attacks.

This was done by the Black Panther Party in the US, as a necessity for survival until the revolution. They built community health care, feeding, child care, education and political training programmes for the black working class in the Ghettos of America and a base for self defense from the racist imperialist state.

Similar forms of resistance were created in the struggle for national liberation in north Ireland, in particular the area of Free Derry liberated by the Provisional IRA in the early 1970s.

These examples of revolutionary struggle by the oppressed were a continuation to what had taken place in China.

From the 1920s until the successful victory of the revolution in 1949 the Chinese Red Army established Red Bases with soviets (workers and peasant councils) which carried out programmes of socialised health care, literacy education, political consciousness raising and self defense in the midst of the civil war and the struggle against Japanese imperialism.

Occupations and resistance are a start of a process of struggle which must develop into a war march by the working class against finance capital.

For the working class and oppressed to take over society for its own benefit and that of all humanity it must be politically educated in a vanguard revolutionary party committed to class struggle and the overthrow of capitalism and capitalist relations. 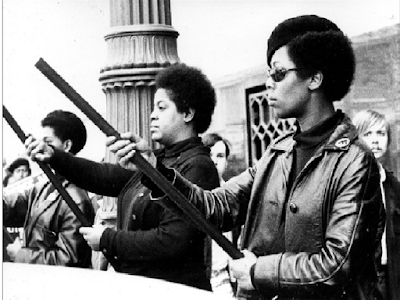 Resistance to social cleansing in Lambeth

Labour run Lambeth “Co-operative” Council was preparing to evict one of the last remaining tenants in one of the Housing co-operatives in Clapham on 22nd April, but they were met with mass resistance.

There have been a number of housing co-operatives in Lambeth for over 40 years on the whole they were derelict properties which were old, many who took them on were squatters and in agreement with Lambeth council in the 70s and 80s were given so called ‘shortlife’ tenancies.

The tenants payed for all the maintenance and up-keep themselves in return for a low rent, they would also be given short notice periods, that was over 40 years ago!  It would generally be assumed that by now it is your home as you had poured in much of your own finances into maintaining these former abandoned houses.

However now the middle class and property investors have made these former  areas of London they previously despised into up and coming playgrounds for the wealthy and the financial services banksters and so forcing property prices (and rents) through the stratosphere.

So now when Lambeth council lays back and excepts the government cuts to local authorities, the savagery of which cannot yet be contemplated fully, they see the chance to make an easy bit of cash by flogging the co-ops off and attacking their elderly and vunerable residence.

Members of the community and local activists rallied to the aid of Trace Newton, who the Doctor had already said was at risk of a stroke due to the stress of the eviction threat, the latest resident of this particular co-op to face eviction at the hands of Lambeth the “Co-operative” council!

At least 50 people gathered around and inside her house on Lillieshall road, Clapham on the morning of 22nd April when the eviction was to take place by court order. Lambeth Housing Activists, Lambeth United Housing Co-operative, along with members of Left Unity, the Green Party, the Labour Party,

Unite the Community, Unison and other local activists and residence  formed a picket around the house and some barracaded themselves inside , some spoke from the top window of the house to the crowd below.

Even the representatives of the bourgeois parties turned up to support the tennent, including Kate Hoey the Vauxhall MP for Parliament.

Officials from Lambeth council brazenly turned up on the scene including their press officer, how exactly he will make good press out of this is anyones guess! 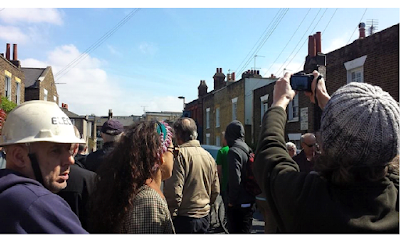 They were quickly shouted and chased away. The cops stood on the sidelines until a bailiff turned up, complete with  knife and bullet proof vest and court order.

The activists quickly formed a tight blockade around the house pushing the fascist bailiff back, the cops attempted in vain to break the blockade and protect the fascist agent of the capitalist court.

They could not break the resistance however and the bailiff was forced to turn and leave. For now the eviction was defeated. Some of the activists had overheard that a new order would be issued by the capitalist courts and the bailiffs and the state forces would return again.

All the activists and the community will be ready to face them off again. We know though that next time they will return with the full force of the state and an army of bailiff thugs to evict Trace Newton.

We can be sure that Lambeth council will face massive resistance again, indeed such resistance to evictions is growing across the capital against the policy of social cleansing which is another ideological attack on the working class and is reviving fascist style terror against tenants and the vulnerable.

No to evictions! De-criminalise squatting! Cap the rents!

Great stuff! Cosmo London is the progressive heart of class-struggle in a sick decaying English empire.