Stathis Kouvelakis : The Moloch of the Memoranda is devouring a new victim : Syriza is purely and simply disintegrating at record speed as a party. 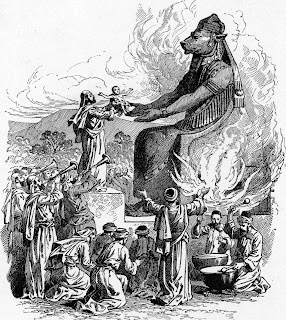 Moloch : Something possessing the power to exact severe sacrifice.

The result of the early morning vote on the Memorandum was a slap in the face of Alexis Tsipras and his government. Of course, the Memorandum was approved, thanks to the support of New Democracy, Pasok and Potami, with 222 votes out of 300. But 43 Syriza MPs refused to support the government (32 "no" and 11 "present"), a figure higher than in any other previous vote.

The "no" vote regrouped the MPs of the Left Platform, the four MPs of KOE, Zoe Kostantopoulou and her close collaborator Rachel Makri, former finance vice-minister Nadia Valavani, Vangelis Diamatopoulos (an MP close to the "anti-authoritarian" milieu) and Yanis Varoufakis. The "present" vote came essentially from MPs of the 53+ tendency, the left wing of the "majority" bloc.

The speech of Alexis Tsipras was particularly defeatist and incoherent. The result of the vote forced him to postpone the decision to call for snap elections. The newly invented manoeuvre will be to ask for a vote of confidence in Parliament, after August 20, to put in a difficult position the No camp within Syriza.

The widely shared impression is that Syriza is purely and simply disintegrating at record speed as a party.

The Moloch of the Memoranda is devouring a new victim. 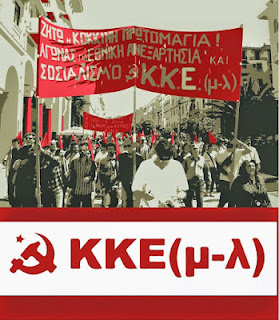 Statement of the Communist Party of Greece ( Marxist Leninist)

The bonds of the third Memorandum are being prepared.

Steady and unified escalation of the antipopular assault.

The people will struggle and overthrow the new assault by the EU – IMF – government.

The first step towards a new memorandum was taken by the voting of the new reactionary monstrosity of Tsipras. The SYRIZA-ANEL government with the aid of the opposition parties moved in full compliance to the demands of EU-IMF-OECD. Using ridiculous arguments and reversing the true facts the government did not pause in sacrificing what was left of  democratic and social rights. The government did not pause in selling what was left of sovereign rights with two parallel aims. One, to make Greece a more sure stepping stone for the US-NATO imperialists, and, two to create more favorable conditions for the exploitation of the people and the working class by the local and foreign capital.

There is much left to be done in the direction of the proper compromises between the imperialists and the full compliance of the local political bourgeois personnel in order to implement a series of barbaric and antipopular measures. But the green light was given by the imperialist masters, a compromise was made between US, Germany and France, and a temporary modus vivendi was drawn among them.

The local bourgeoisie and the various political centers have agreed upon this balance. The “classic” memorandum parties such as ND, PASOK and POTAMI run in aid to the SYRIZA-ANEL alliance voting in favor of the third memorandum which deepens the imperialist dependence of the country and escalates the capitalist assault.

Nevertheless all inter-imperialist contradictions are in a very acute phase. Thus there are conflicts among Hollande, Schäuble, and others. So this compromise is temporary. The developments in Ukraine, Syria, Turkey, Palestine, and Iran will create new conflicts among the imperialists, which will be reflected in new plans for Greece.

The ambition of SYRIZA to become the basic carrier of the antipopular assault and the need of the dependent Greek capitalism to implement the imperialist demands force the system towards a political reshuffling. This will be done either through new elections or other means of a broader parliamentary support to the government in order to bypass the leaking of SYRIZA MPs.

The above are of major importance as the the agreement with the EU will be followed by a barrage of antipopular implementation laws. Complementary to those will be the intensification of state repression, the attack on the workers and peoples movement, and the need for parliamentary (and not only) coups.

The new and old rulers need not be overjoyed about the contemporary state of the movement. They need not be overjoyed about the temporary pause of the struggles. The escalating barbarity will create new struggles. Struggles against  capitalist and imperialist domination, against illusions of a left government-savior, against the disorienting proposals of “rupture” without popular support. The popular classes and the youth will resist  barbarity and will demand their fundamental rights on the road to overthrow the system of dependence, exploitation and suppression.