US Targets Venezuela Using Border Dispute as Pretext :A New Front in the Destabilisation of Venezuela 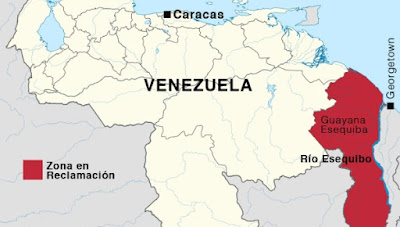 The ongoing border dispute between the Bolivarian Republic of Venezuela and its eastern neighbor Guyana is no simple disagreement over an arbitrary line on a map. Actually, it is a conflict of significant political and economic dimensions, one which will have deep and far-reaching geopolitical implications in the near and long term.

The area in question is known as Guayana Esequiba (Essequibo), a region with competing territorial claims going back more than a century to a time when British imperial interests dominated the contours of the political map of much of the world, including Latin America. Since 1966, when Guyana became a nominally independent country, this territory has been under dispute by the interested parties; Venezuela has claimed the territory as part of its sovereign authority going back to an odious 1899 decision in favor of Britain.

However, that has not stopped Guyana from seeking to undermine the stability of the region by claiming de facto sovereignty over the whole of the territory, selling highly valued oil and gas exploration concessions to key North American corporate energy interests. These actions have led to an intensification of the conflict, forcing Venezuela to respond with diplomatic and political pressure. But of course, as with all things pertaining to Venezuela on the international stage, there is a hidden agenda rooted in the imperial politics of Washington.

In its attempt to stifle Venezuela’s political and economic development as an independent regional actor, the US is using its influence to destabilize the region. The goals are distinct, but intimately connected: enrich US energy corporations at the expense of Venezuela and, simultaneously, both position military assets and shape propaganda that paints Venezuela as an aggressor, thereby providing the pretext for US escalation. In this way, Washington is attempting to reassert by stealth the hegemony it once maintained with brute force.

The Economics and Politics of Esequiba

At the heart of this border dispute is energy and the billions of dollars in profits likely to be extracted from the offshore territory. According to the US Geological Survey (USGS), “The Guyana Suriname Basin [is] 2nd in the world for prospectivity among the world’s unexplored basins and 12th for oil among all the world’s basins – explored and unexplored.” The basin, which stretches from eastern Venezuela to the shores of northern Brazil, is one of the major prizes in the world for energy corporations and governments alike.

Indeed, the USGS estimates that roughly 15 billion barrels of undiscovered oil and 42 trillion cubic feet of gas reserves lie under the basin, just waiting to be extracted. Such staggering economic potential has made the territorial waters off Venezuela and Guyana highly sought after, especially since the contesting border claims make the legal obstacles to exploration far more surmountable as they allow companies to deal with a compliant government in Georgetown, rather than an independent one Caracas.

The unresolved conflict over territorial claims has not stopped the newly elected Guyanese government of David Granger from picking up where its predecessor left off, and supporting Exxon Mobil’s exploration drilling in the Stabroek Block, which lies in the heart of the disputed territory. The importance of the competing claims is further underscored by the fact that the very week of Granger’s election victory, Exxon Mobil reported a “significant oil discovery” in the very same area. Whether the announcement of the discovery was timed to coincide with the accession of Granger to the presidency, or it was mere coincidence, is somewhat secondary to the critical fact that this announcement infuses the dispute with a significant economic component; it is no longer merely about potential energy deposits, but actual energy extraction. This development provides an added imperative for the US to flex its muscles in this conflict.

And so it has. The US has recently officially thrown its weight firmly behind its political, economic, and military ally Guyana. However, beyond simply backing Guyana in a bilateral fashion, the US has wielded its influence in the Caribbean Community (CARICOM) organization to position the grouping to “stand firmly behind Guyana,” as Freundel Stuart, prime minister of Barbados and chairman of CARICOM stated earlier this month. Unlike ALBA and PetroCaribe, two regional groupings led by Venezuela that are not under the dominance of Washington, CARICOM is in many ways part of US power projection in the region.

Again, it is unlikely that the US and CARICOM positions in support of Guyana, announced within days of each other, and within eight weeks of a major discovery and all-important election, are mere happenstance. Instead, they are part of a broader campaign of political escalation designed to pressure Venezuela into either dropping its claims entirely or, at the very least, toning down its demands that its sovereignty and territorial integrity be acknowledged and respected.

But the escalation is not merely one of rhetoric. Rather, the US is turning up the heat both militarily and the realm of propaganda and public relations.

A New Front in the Destabilization of Venezuela

It is no secret that that the US has sought to undermine and destroy the Bolivarian revolution from almost the very moment of its birth with the ascendance of Hugo Chavez. While perhaps the most prominent example of such subversion came with the 2002 coup against the legal government of Venezuela – a failed regime change supported by Washington despite almost universal international condemnation – it is by no means the only attempt at destabilization. Since Chavez’s passing, the soft power subversion and sabotage of the government has only increased, from economic warfare to the funding and support of Venezuela’s opposition. It is within this context that the developments in the Venezuela-Guyana dispute must be understood.

Essentially, the conflict with Guyana is both an economic one, and a military/strategic one. While there is not a hot war between the two countries, the US has positioned its assets in such a way as to make that a very real possibility.

Though downplaying the US role, Washington has been sending a clear message – one might say a veiled threat of force – to Caracas with some of its recent comments. The Charge D’Affaires of the US Embassy in Guyana recently stated that,

“The US has a long-standing relationship with the Guyana Defence Force (GDF). We have engaged in a number of co-operative and developmental efforts over the years to provide training and expertise...and exchange experience in a wide variety of areas.”

Such statements may seem relatively innocuous, but they are to be read as an acknowledgment of the military capacity of US power in the region, which in many ways sees Guyana as a de facto proxy.
Indeed, there is much evidence upon which to base such an assertion aside from just the words of US officials. Since 2010, the US Navy has had a cooperative relationship, including docking and training, with its Guyanese counterparts based in Port Georgetown.

In addition, Guyana figures prominently in the Pentagon’s project in South America known as SOUTHCOM, with the country seen as an outpost for US military power projection against Venezuela.

Though much of this military cooperation and partnership is already known, there is a new danger for Venezuela, one that most political observers around the world have either missed or otherwise ignored: the accession of David Granger to power.

While he has been heralded by western media as a reformer leading a multiracial, inclusive coalition, the overlooked fact is that Granger is a direct military product, if not asset, of the US and its allies.

“attended the University of the West Indies, the University of Maryland and the National Defence University in the USA...He received his military training at the Mons Officer Cadet School and the School of Infantry in the United Kingdom, the Jungle Warfare Instruction Centre in Brazil, and the Army Command and Staff College in Nigeria.”

Students of the modern history of Latin America are all too familiar with this story: US and British trained military leader assumes control over strategically and geopolitically important country in the region, one that shares a border with a declared adversary of Washington. Though he may not be a product of the infamous School of the Americas, Granger’s pedigree, coupled with his declared focus on the “territorial integrity” of Guyana portends dangerous potential moves by his government, especially at a time of escalating tensions.

Of course, the US continues with its propaganda campaign against the Bolivarian Republic as well. From imposing sanctions against Venezuela for trumped up “human rights abuses,” to declaring the country “an unusual and extraordinary threat to the national security and foreign policy of the United States” that constitutes a “national emergency,” Washington has clearly taken the decision to ratchet up tensions in 2015. The dispute with Guyana is clearly a new vector in this broader destabilization strategy.

And that is how the border conflict must be understood – a new front in an old war. Though there may be billions at stake for energy corporations, as well as military imperatives for the Pentagon, ultimately the dispute is geopolitical in nature. The Guayana Esequiba issue is, at its root, an issue of US hegemony and imperialism.

Eric Draitser is an independent geopolitical analyst based in New York City. He is the editor of StopImperialism.org and host of CounterPunch Radio. You can reach him at ericdraitser@gmail.com