Racism is Never Red : Statement of Serve the People - Norway 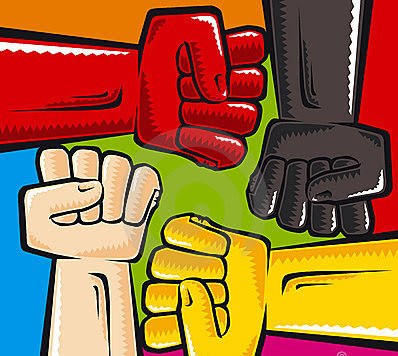 
We are concerned at what seems like a growing trend; people who call themselves red or leftist and and want to stop immigration.

It is old news that self-proclaimed socialists will stop social dumping with stricter border controls.

But it seems that the trend is growing, at least about discussions and statements in the media and on the Internet is representative.

Hans Rotmo's vulgar racist exclamation against Muslims does not come from thin air.

It seems like there are more people who share his basic attitude. Serve the People have no sympathy for this. EU and Schengen states have built a wall around Europe against the poorest and most desperate people.

It is outright killings of refugees as they do not see other ways out than to risk their lives in small boats across the Mediterranean.

And politicians agitation against beggars and attempt to harass these off the streets, show that within Europe movement be completely free - except for for poor people.

Serve the People struggles consistently against all attitudes that puts working people against working people, the poor against the poor. We are not afraid of refugees - we know them, we live together, we are refugees.

We are not afraid of migrant workers, they are our fellow workers. And we are not fighting to preserve the "welfare state" but to smash capitalism and create real security and welfare for everyone - not just those who live work in Norway.

The red attitude, the radical attitude, is basic anti-racist. It is based on proletarian internationalism, of solidarity and cohesion.

What we think of course does not mean that immigration solves social problems.

We do not believe that 8,000 refugees from Syria solves the problem of war and destruction in the Middle East.

Only Revolutions, only communism can solve these system issues. But for 8,000 people this will mean far more security than they could get if they "helped where they are".

Being able to flee war and persecution is no privilege, but should be a human right.

We think of course does not mean that Norwegian politicians are humanists.

On the contrary - they are responsible for their grotesque abuse against other people (Afghanistan, Libya) and for the inhumane asylum policy; the state racism.

We see the terrible hypocrisy of the politicians who let thousands die, negotiating the few to escape from the war they themselves contribute to (Syria).

But just as immigration and 8,000 refugees do not resolve capitalism's problems, closed borders or racism does not lead us a centimeter closer to solutions. Closed border cannot even stop social dumping.

Privatization, lower social security, crisis and liberalism comes not from immigration or refugees.

And capitalists do not need a  single immigrant to lower real wages to people.

It is the very useful to these, that people turn their anger against immigrants instead of against the bourgeoisie

Racism is never red - there are no "immigration-critical" socialism.

It is at best a dead end, at worst a deeply reactionary and terribly dangerous policy that is only suited for splitting the people and preserve capitalism.