The situation of the country is now inching close to the brink of a war due to the continued anti-DPRK political and military provocations by the U.S. imperialists and the south Korean puppet forces.

The broadcasting for anti-DPRK psychological warfare, resumed by the south Korean puppet military gangsters in all sectors of the front under the pretext of doubtful "mine explosion" case which occurred in the demilitarized zone of the western sector of the front on August 4, is still going on day and night.

And the leaflet-scattering operation against the DPRK, kicked off with mobilization of die-hard reactionary organizations, has gone beyond a tolerance limit.

Psychological warfare against the DPRK is, in essence, an open act of war against it.

In this regard, the General Staff of the Korean People's Army on August 20 sent an ultimatum to the south Korean puppet Ministry of Defense that a strong military action would be launched at once unless it stops the anti-DPRK broadcasting for psychological warfare and removes all psywar means within 48 hours.

Nevertheless, the south Korean puppet military gangsters getting frantic in provoking the DPRK again invented a case of "shell fired by the north" in the afternoon of August 20, Juche 104 (2015) and, under that pretext, fired dozens of shells on the DPRK's inviolable territory, a reckless military action.

Such reckless political and military provocations on the part of the south Korean puppet military gangsters are driving the country to a war crisis. 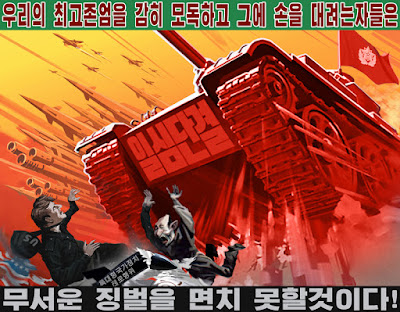 Under the prevailing grave situation, an emergency enlarged meeting of the Central Military Commission of the Workers' Party of Korea (WPK) was convened at night of August 20.

The meeting heard a report of the General Reconnaissance Bureau of the General Staff of the KPA on how the enemies committed the military provocation in the central western sectors of the front in the afternoon of Thursday, its truth and their general movements.

It examined the preparations for launching operations of the frontline large combined units of the KPA as of 23:00 on Thursday and discussed a plan for the political and military counteractions to foil the enemies' moves for war.

The meeting also examined and ratified the offensive operation plan of the KPA Front Command to launch retaliatory strike and counterattack on the whole length of front all at once under an unavoidable situation.

And the Central Military Commission of the WPK approved the decision of the KPA General Staff in which it sent to the south Korean puppet Ministry of Defense an ultimatum on 17:00 on Thursday that the KPA would launch a strong military action unless it stops psychological broadcasting towards the north and dismantle all means for psychological warfare within 48 hours.

At the emergency enlarged meeting of the Central Military Commission of the WPK, Kim Jong Un issued an order of the supreme commander of the Korean People's Army that the frontline large combined units of the KPA should enter a wartime state to be fully battle ready to launch surprise operations and the area along the front be put in a semi-war state from 17:00 on Friday.

Commanders were appointed and dispatched to the relevant sectors of the front to command military actions in the areas to destroy means for psychological warfare unless the enemies stop the psychological broadcasting within 48 hours and put down their possible counter-actions.

The meeting discussed the measures to convert the party and power bodies, working people's organizations, state security, people's security and judicial and prosecution organs, factories, enterprises, cooperative farms and other units in the relevant areas into the semi-war system as the semi-war state has been declared in the area along the front. It also set forth the duties and tasks of officials in charge of external affairs to fully lay bare the truth about the prevailing situation caused by the enemies' undisguised and surprise aggression.


THE AUGUST MEETING FOR PEACEFUL RE - UNIFICATION OF KOREA


A joint meeting for peace and reunification of Korea took place in North Korea as  part of the conference for national reunification for celebrating the 70th anniversary of Korea's liberation.

Among the participants are also a delegation of the Syrian Arab-Korea Friendship Association, a delegation of the Vietnam Union of Friendship Organizations, a delegation of the Australia-DPRK Association for Friendship and Culture, the chairman of the Afro-Asian People's Solidarity Organization, the executive secretary of the World Peace Council and other foreign guests. Speeches were made at the meeting. Then followed a joint performance given by the art squad of the Central Committee of the Kim Il Sung Socialist Youth League and overseas compatriots and a dancing party.
Posted by nickglais on 8/23/2015 11:56:00 AM