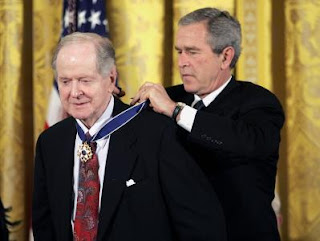 Imperialism and Anti Communism Rewards its own


Robert Conquest, after Leon Trotsky arguably the chief anticommunist and anti-Stalin propagandist of the 20th century, has died. Naturally, the capitalist media are fawning over him.

A lot could be said about Conquest. I'll say a bit at the end.

Here are some facts -- I have checked them -- concerning Conquest's most famous book _The Great Terror_:

Robert Conquest has also been identified as having worked for the IRD from when it was set up until 1956. The Information Research Department (IRD), was a section set up in 1947 (originally called the Communist Information Bureau) whose main task was to combat Communist influence throughout the world by planting stories among politicians, journalists and others in a position to influence public opinion.

A 1978 story in the The Guardian alleged that Conquest's work there was to contribute to the so-called "black history" of the Soviet Union -- in other words, fake stories put out as fact and distributed among journalists and others able to influence public opinion.

After he had formally left the IRD, Conquest continued to write books suggested by the IRD, with Secret Service support. His book The Great Terror, a basic anti-communist text on the subject of the power struggle that took place in the Soviet Union in 1937, was in fact a recompilation of text he had written when working for the secret services.

The book was finished and published with the help of the IRD. A third of the publication run was bought by the Praeger Press, normally associated with the publication of literature originating from CIA sources. Conquest's book was intended for presentation to "useful fools", such as university professors and people working in the press, radio and TV. Conquest to this day remains, for anti-communist historians, one of the most important sources of material on the Soviet Union.

The article from _The Guardian_ in 1978 documents the propaganda activities of the IRD:

In his Ph.D. dissertation, but not in the book that he wrote from it, Arch Getty pointed out:

The dominant tendency [in writing the history of the "purges"]  has been automatically to believe anything an emigre asserted while automatically denying the truth of everything from the Stalinist side. If one wanted a balanced picture of Tsar Ivan IV, ("The Terrible"), one would not accept at face value the descriptions of the exiled Prince Kurbsky in Poland, during a period of Russo-Polish war.

If one wanted a balanced picture of Mao Tse-Tung's regime in China, one would not accept Chiang Kai-Shek's version in the early 1950's as essentially reliable.

If one were not interested in such a view, one would. The apparent monstrosity of Stalin's crimes and a generation of Cold War attitudes have contributed to what would be considered sloppy scholarship in any other area of inquiry.

Getty also pointed out that Conquest specialized in anticommunist propaganda masquerading as scholarship while working for British intelligence.

Sometimes, the "scholarship" had been more than simply careless. Recent investigations of British intelligence activities (following in the wake of U.S. post-Watergate revelations), suggest that Robert Conquest, author of the highly influential Great Terror, accepted payment from British intelligence agencies for consciously falsifying information  about the Soviet Union. Consequently, the works of such an individual can hardly be considered valid scholarly works by his peers in the Western academic community.

In 1980 I interviewed Professor John Hazard of Columbia University, at the time the world expert on Soviet law.

Hazard told me that people in the Soviet studies field had told him that British intelligence was still doing Conquest's research for him.


...Conquest (Terror, 754) ... makes the astounding statement that "Truth can thus only percolate in the form of hearsay." And, further, "On political matters basically the best, though not infallible, source is rumor ... ". He believes that the best way to check rumors is to compare them with other rumors--a dubious procedure given the fact that emigres read each others' works. Of course, historians do not accept hearsay and rumor as evidence in any other field of history.

The point of view adopted here is that the standard interpretations of the "Great Purges", such as those by Fainsod and Conquest, are seriously flawed, cannot account for the available evidence, and are thus no longer tenable. (53)

A good reply to Conquest's dishonesty is the article by Robert W. Thurston,

"On Desk-Bout Parochialism, Commonsense Perspective, and Lousy Evidence: A Reply to Robert Conquest," in Slavic Review 1986, 238-244.

I don't see any other scholar officially in the field of Soviet history ever daring to attack Conquest head-on in print, in a mainstream journal.

Conquest replied in kind, trashing Thurston's book on the history of the USSR in the 1930s when it was published by Yale University Press in 1996. Thurston's book was by far the best book on this period up to that point and is still the best because he rejects the knee-jerk anticommunist, anti-Stalin line and sticks to the evidence, with only a handful of lapses.

Thurston also published an excellent article showing the dishonesty of the term "Great Terror" by pointing out that very, very few people were in fact "terrorized."

(This article elicited a hostile but very weak response by Conquest, to which Thurston replied with the article about "loosy evidence," quoted above.

After Conquest's book on the Ukrainian famine, _Harvest of Sorrow_ was published in the 1980s the anticommunist experts in the Soviet history field universally rejected it. You can read some qutatoins from them in the article by Jeff Coplon, "In Search of a Soviet Holocaust. A 55-year-old Famine Feeds the Right."     _Village Voice_ January 12, 1988.  Coplon's article, with quotations from the anticommunist scholars, is at

Of course there was no deliberate famine. Quite the opposite: Collectivization put an end to famines in Russian - Ukraine.

Conquest later retracted his view that Stalin had deliberately caused the famine. I have the quotation from him in my book _Blood Lies_.

After my book _Khrushchev Lied_ was published in Russia I was interviewed by _Literaturnaia Rossia_, a literary-cultural journal. The interviewer asked me some tough questions, which was fine!

Part of my reply was about Conquest's book _The Great Terror_:

As a graduate student from 1965-69 I opposed the US war in Vietnam. At one point somebody told me that the Vietnamese communists could not be the "good guys", because they were all "Stalinists", and "Stalin had killed millions of innocent people."

I remembered this remark. It was probably the reason that in the early 1970s I read the first edition of Robert Conquest’s book The Great Terror when it was published. I was shaken by what I read!

I should add that I could read the Russian language since I had already been studying Russian literature since High School. So I studied Conquest’s book very carefully. Apparently no one else had ever done this!

I discovered Conquest was dishonest in his use of sources. His footnotes did not support his anti-Stalin conclusions! Basically, he used any source that was hostile to Stalin, regardless of whether it was reliable or not.

- "The Sixty-One Untruths of Nikita Khrushchev. " At

Conquest -- with the help of the British intelligence service --took the lies about the Stalin period concocted under Khrushchev and by him, added more lies from anticommunist sources in the West like Alexander Orlov and Walter Krivitsky, and presented this as "history."

Lots of footnotes, which are intended to fool the educated but naive reader. But those same footnotes made it possibel for me to discover that Conquest used phony evidence and _never_ proved "any_ of his anticommunist, anti-Stalin claims.

25 years later, when Gorbachev took up Khrushchev's anticommunist and anti-Stalin lies, repeated them, and added more lies of his own, Conquest issued a new edition of _The Great Terror_ and told everybody "I was right."

He wasn't "right." Gorbachev was simply telling the same kinds of lies, and often the very same lies, about the Stalin period that Khrushchev and his people had told.

Conquest got a lot of honours from the mass-murdering imperialists, from Margaret Thatcher to Ronald Reagan and beyond. He earned their praise.  He also got a cushy, high-paying post at the Hoover Institution.

Such are the rewards for telling lies on behalf of the anticommunists.

We should realize that no one so honoured by the chief mass murderers of world history can ever be telling the truth.

Those of us who want to struggle for the better, communist world need to learn from the successes, as well as from the mistakes, of the Stalin-era Soviet Union and the worldwide communist movement of the 20th century, so we can imitate what they did right while avoiding what they did wrong. So, let's redouble our commitment to doing just that