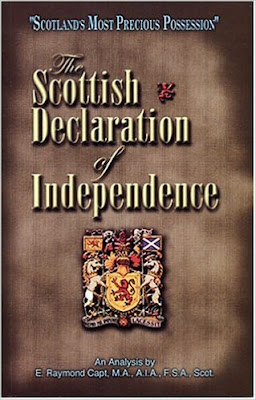 Democracy and Class Struggle welcome the creation of the new Scottish socialist formation RISE Respect - Independence - Socialism - Environmentalism but we also feel it necessary to offer criticism of the SYRIZA model on which they have based themselves.

Democracy and Class Struggle says that it is delusional if the Scottish Left in RISE  Respect - Independence - Socialism - Environmentalism to think that an Independent Scottish Socialist Republic can be legislated through the Scottish Parliament or any other bourgeois institution and we sincerely hope the new RISE organisation in Scotland does not promote a purely social democratic electoralist view of democracy on the discredited Syriza Reformist model.

Sovereignty is not something that you ask the UK parliament for but something to declare for yourselves. A Scottish Declaration of Independence.

The Scottish people will have to create new Scottish institutions like a democratic Constituent Assembly if they want to really challenge the British State and create an Independent Scotland.

Socialism in Scotland will be opposed by the British State with all the perfidiousness it can muster which has been on display to the world for centuries and no one should be ignorant of it now least of all socialists and communists.

John Maclean Scotland's great son and inspirer of the idea of an Independent Scottish Socialist Republic was a victim of that perfidy and knew the difference between Reform and Revolution in the struggle for National and Social Liberation and we must not forget it now.

John Pilger’s harsh but accurate Syriza description is noteworthy (“The Problem of Greece Is Not Only a Tragedy. It Is a Lie,” Global Research, July 13, 2015): “The day after the January 2015 election a truly democratic and, yes, radical government would have stopped every euro leaving the country, repudiated the ‘illegal and odious’ debt – as Argentina did successfully—and expedited a plan to leave the crippling Eurozone. But there was no plan. There was only a willingness to be ‘at the table’ seeking ‘better terms.’”

Pilger continues: “The true nature of Syriza has been seldom examined and explained. To the foreign media it is no more than ‘leftist’ or ‘far left’ or ‘hardline’—the usual misleading spray. Some of Syriza’s international supporters have reached, at times, levels of cheerleading reminiscent of the rise of Barack Obama. Few have asked: Who are these ‘radicals’? What do they believe in?

“The leaders of Syriza are revolutionaries of a kind—but their revolution is the perverse, familiar appropriation of social democratic and parliamentary movements by liberals groomed to comply with neo-liberal drivel and a social engineering whose authentic face is that of Wolfgang Schauble, Germany’s finance minister, an imperial thug.

Like the Labour Party in Britain and its equivalents among those former social democratic parties still describing themselves as ‘liberal’ or even ‘left,’ Syriza is the product of an affluent, highly privileged, educated middle class, ‘schooled in postmodernism,’ as Alex Lantier wrote.”