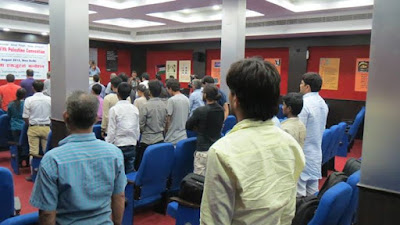 New Delhi, 22 August. Writers, intellectuals and activists gathered today at Aiwan-e-Ghalib auditorium in New Delhi as part of a two-day convention to express their solidarity with the on going struggle of Palestinian people against the Israeli occupation and its continued genocidal campaign.

This convention is being held to mark the first anniversary of the deadly bombardment on Gaza by Israel which killed more than 2200 people including 500 children.

The first event in the convention was a symposium on 'Zionism and the Palestinian Resistance: Historical Perspective, Challenges and Prospects'. The symposium began with a presentation by ND Jayaprakash, Vice President of Delhi Science Forum.

Outlining the history of Zionist movement Mr. Jayaprakash explained that the birth of Israel as nation was a consequence of uprooting the native Palestinian population from their own land and even after that it continued to occupy vast stretches of Palestinian territories.

He also explained the nature of current Israeli occupation in West Bank and Gaza where even the most basic civil rights of Palestinian people are being snatched away by the Israeli occupier.

Speaking at the symposium author and musician Peggy Mohan said that we must differentiate between Zionism and Judaism in the same way as we must do in case of Hindutva and Hinduism.

Israel today is an outpost of US imperialism in the middle-east whose natural resources are being devoured by this beast. She said that the Palestinian resistance offeres hope that this world order can be changed.

Anand Singh from ‘Indian People in Solidarity with Palestine’ said that right from its origin Zionism has made close allaince with the leading imperial and colonial powers and after the second world war the emergence of US as the most poweful imperial power has brought it closer to US.

He said that Zionism today exists with the support of not only US but even the rulers of Arab world who are fearful of the mass revolt in their own country. He also said that all the electoral parties in India have betrayed the cause of the Palestinian people and the people of India must oppose the proposed visit of Narendra Modi to Israel.

General secretary of Palestine Solidarity Committee Feroze Mithiborewala from Mumbai said that Palestinian issue has become the central most Geo-political issue today. He called today’s world order globalised monopoly capital characterised by US imperilism and Israeli Zionism. He said that the Palestinian resistance has ensured that cracks have started to come to appear due to global movement of Boycot, divestment and Sanctions. He said that the ideology of Zionism is being challenged in differet parts of the world.

23rd August The two-day convention to express solidarity of Indian people with the ongoing resistance of Palestinian people against the Israeli occupation and its continued genocidal campaign was concluded today at Ghalib institute in Delhi. During the convention today it was decided to launch a signature campaign to put pressure on the Indian government to cancel the upcoming visit of Narendra Modi to Israel and sever India's diplomatic links with Israel. Today’s session began with a symposium on "New Imperialist Design of Middle-East and the Question of Liberation of Palestine".

The first speaker in the symposium was Prof. Zikrur Rahman, former Indian ambassador to Palestine. He said that the imperialist design in middle-east has always been to subjugate the people of the region.

Abhinav Sinha, editor of students-youth magazine 'Ahwan', said while outlining the history of imperialism that the control over the strategic commodity of oil in the middle-east not only ensures military and economic supremacy of an imperial power but it also hampers the interest of the rival imperial powers. He said the Zionist project received the support of the imperialist powers because of the crucial location of Palestine from geo-political perspective.Today middle-east has become a knot of the imperialist contradictions. This contradiction cannot be resolved through national liberation but only through a workers’ revolution. He emphasised that a two-state solution to the Palestinian people is not viable and only solution which is left is a one state solution which happens to be a socialist project.

Senior journalist Sukumar Muralidharan said that the last year’s Israeli bombing over Gaza was unrequited crime, yet the undying spirit of Palestinian resistance continues to prevail. After the so called global war on terror it was the fourth outright military assault by Israel against Palestine.

He added that the US’s objective in attacking Iraq was to help the Israelis to relocate Palestinian people to the Iraqi territory. The chaotic situation in the middle-east is bound to produce more violence and suffering of the Palestinian people. But he also expressed hope that one day this issue will be resolved.

Palestinian activist Nasser Barakat thanked the Indian people for their support to the Palestinian cause. He said that being a Palestinian he was not at all against Jews but Palestinian people would continue to fight against the occupation of their land by Israel.

Pheroze Mithiborwala gave a presentation which provided the evidence of Islamic State’s link with US and Israel and appealed the Indian muslims must come forward to expose it. Mr. N.D. Jayaprakash also gave a presentation in which he vividly portrayed the hardship of the Palestinian people in the apartheid state called Israel.

The symposium was followed by a session of music in which Vihan Saanskritic Manch presented a few Palestinian songs and songs expressing solidarity with the Palestinian resistance.

This was followed by the screening of a documentary film "Five Broken Cameras" which brilliantly portrays the resistance of a Palestinian village in the West Bank against the construction of a separation wall in their village.