We are going to accomplish the New People's Democratic Revolution 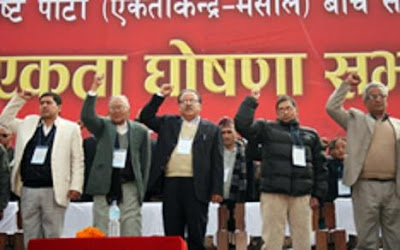 How are you taking the recent unification of the CPN-Maoist and CPN-Unity Centre?

Some people say that this unity will not exist for a long time because of the differeces of the opinion. Can you clarify them?

- There are no differences of opinion. If there were differences in opinion, the unity would not be possible, rather it would be impossibe. We came to the conclusion because there is no difference in opinion. It is only an illusion of those who are saying so.

Would you tell us something about Maoism and Mao Zedong-thought that the party has accepted?

After 13 years, we have united. The cooperation for the 19-day People's Movement began from the Siliguri meeting, in India, with the 12-point understanding. Along with cooperation, the inter-relationship and understanding developed between the two parties. The Unified CPN-Maoist has openly accepted Maoism amd Mao Zedong-thought. We have, now, made a strong unity and it is the starting of the unity for the revolutionaries. This is a very positive initiative in the history of communist movement of Nepal. We are going to accomplish the new People's Democrtic Revolution.

So, you think that the Unified CPN-Maoist is able to lead the People's Movement or rebel here after?

People rebel. When the enemies of the people create problems and they do not give way to write the constitution, we call the people for rebel against the foreign reactionary powers and their domestic puppets and the remnants of the feudal order. We will successfully lead the rebellion.

Are you thinking to carry the process of party unity ahead with the other communist parties and organizations too?

The process of party unity has begun. The recent unity is a great beginning of the party unity. We hope that other small communist parties and organizations will be for party unity.

Some others say that the party unity is to make a big party for the next election. The slogan of insurrection is only speech. How do you respond them?

The important election of the Constituent Assembly has already been accomplished. We have to accomplish the revolution according to the aspirations and the mandate of the people expressed through the struggles. The question of a big party is not related to the question of insurrection. The party line is the important thing for it. Nepali Congress was a big party, but it was defeated in the elections. Therefore, the conception that a big party always wins the election is wrong. The policy, plan and the decision of the party addressing the voice of the people is the main thing here.

You are the only remaining founder member of Communist Party of Nepal. How do you feel on the revolutionary party unity?

What do you want to say to the interntional revolutionary parties and the organizations?

Firstly, I want to say that the countries of the world have their own specificities. According to the specificities and the situation of the country, communist parties should do their work. They should try to make their own plans suitable to the specific situation. I want to call them to make and launch the struggle in their own country. By making the policy and plan of the struggle for the implementation in our own countries, we can serve Proletarian Internationalism.