Resistance until the victory! All of us are Palestinian, everywhere is Palestine! 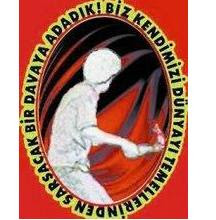 During this attack, Turkish Republic criticized Israel and tried to show that it supports the rights of the Palestinians but this is not true. Fascist Turkish state is the best ally of Israel in the region and both are the puppets of the US imperialism. Israeli soldiers are still trained in Turkey and Turkish army bought millions of dollars cost weapons from Israel just before the occupation.

PM Erdogan tries to show that he is a friend of Palestinians and by this, US and Israel wishes to send Turkish troops to Gazza. So all Palestine can be under control of US imperialism and Israel by the help of their Turkish allies’ military forces. In our country hundred thousands of people condemned Israeli aggression and show their solidarity with Palestinian people. YDG actively joined and organized such protests. Savra savra hatta nasr!