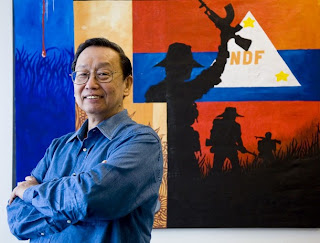 The National Democratic Front of the Philippines condemns the barbaric
aerial and artillery bombardment by Israel on the Palestinian people in
Gaza. This was preceded by many months of Israeli siege preventing
medicine, food and other essentials from coming into Gaza. Now these
aerial strikes and artillery bombardment have already caused the death
of over 380 people and the wounding of more than 1,700 victims. Many of
the victims are children, women and elderly. The targets have included
hospitals, mosques, the Islamic university and other social institutions
of the Palestinian people. Palestinians in the West Bank militantly
expressing their solidarity with their brothers and sisters in Gaza have
been shot, killed and violently dispersed by the Israeli regime.

The NDFP also vigorously condemns the US for continuously providing the
Israeli regime with the military support amounting to billions of
taxpayers' dollars every year, and justifying Israel's aggression
against the Palestinian people and other peoples in the Arab world. The
US has vetoed every UN Security Council resolution which condemns
Israeli aggression. Now, the US is again justifying this blatant Israeli
aggression which flagrantly violates all standards of human rights and
international humanitarian law. The US and Israel are orchestrating a
global diplomatic and propaganda campaign to unjustly blame Palestine
and the Palestinian people for this latest Zionist aggression.

The NDFP and the Filipino people who are waging a revolutionary struggle
against US imperialism and the US-backed fascist regime of Gloria
Macapagal-Arroyo stand in firm solidarity with the Palestinian people.
The Palestinian people have the inalienable right to their homeland, to
resist the illegal and unjust occupation of Palestine, and to struggle
for national and social liberation.