Maoists to campaign for 'One Madhes, many province' 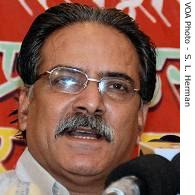 The internal deliberations of the Maoist party on the issue of Madhes concluded, Friday, with the party deciding to launch public campaign in the region.

Speaking at the meeting, party chairman and Prime Minister Prachanda' has expressed firm commitment to resolve Madhes problems. He termed the slogan of Madhesi parties "One Madhes, One Province" as being anti-Madhesi.

The Maoists have, instead, favoured the slogan of "One Madhes, Many Province."

The party will mobilise its entire force to campaign and strengthen its organisation in Madhes region.

"We have seen the Madhesi problem not in isolation but taking it as a national problem, which also has class dimensions," said Maoist spokesperson Dinanath Sharma.

The party's central secretariat meeting is expected to take concrete decisions regarding the party campaign.
Posted by nickglais on 1/31/2009 02:56:00 AM