Ramsey Clark says Prachanda's ferocity, is for social, political justice for his people 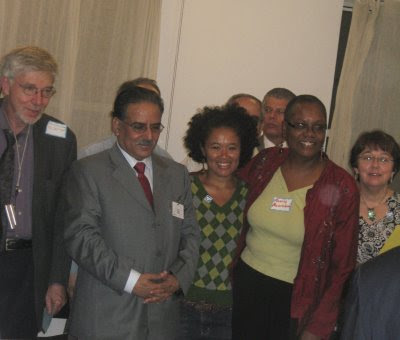 On Sept. 25, the International Action Center had the unique honor of hosting a reception for revolutionary activists in the New York area to welcome Prachanda, the new prime minister of Nepal, who is visiting the city for the United Nations General Assembly.

Comrade Prachanda is chairperson of the Communist Party of Nepal (Maoist) and led the people's war that ousted Nepal's monarchy and old parliamentary system. The CPN(M) won a decisive victory in constitutent assembly elections held earlier this year.

The program was co-chaired by Sara Flounders of the IAC and LeiLani Dowell of FIST.

In her opening remarks, Flounders emphasized the importance of the peoples war in opening up avenues for real democratic and social change in Nepal by going outside the corrupt structure of the parliament and refusing to accomodate the monarchy. This has helped to not only displace the royalty, but to lay the basis for a constitutent assembly to create new democratic structures and rewrite the constitution of Nepal. She said this was a powerful example of how the struggle of poor and working people coming from the grassroots was the fundamental condition for social change.
Posted by nickglais on 9/26/2008 03:47:00 AM

To bad invitations didn't find their way to Kasama, Freedom Road Socialist Organization, or Party for Socialism and Liberation...

Workers' World Party had him all to themselves I guess.

I assume that Workers World Party was active in support of CPN Maoist.

I know that FRSO and Party of Socialism and Liberation was and of course Kasama and RCPUSA was as well as individual Maoists.

Hope to get report from New School soon where these comrades get a chance to see the Fierce One.