Question to Prachanda at New School - In a Hostile World, How are you going to do it ? 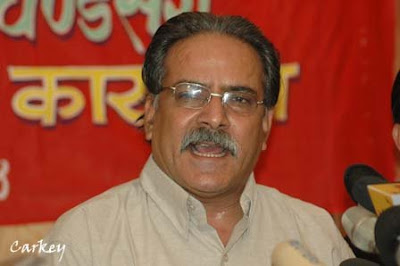 An initial transcription of one question asked of Prachanda at New York's New School Event (Thanks to Artemio).
This Photo is from Comrade Zero's site the Marxist Leninist. Other photos are available from Jon of Kasama/Philadelphia .

Question from the Floor:

Lal Saalam. It's a very exciting time in Nepal. You are carrying out a national democratic revolution. You are also the first communist to become head of state in many years, in my lifetime — and I am not a young man.

How do you plan to reconcile the serious tasks of national democratic, even new democratic revolution in nepal with the crisis the world is going under — considering the actions of the United States government, the Europeans, and the hegemonists who believe a handful of nations can dominate the rest of the world into backwardness?

How you gonna do it?

And what we are doing, as Prof. Arato also raised this question– very savily and very provocatively, you know. I understand the depth of history and dynamics of its expression you know. But what we are doing in the first decades of the 21st century is concrete analysis of concrete conditions.

We are trying to understand the whole phenomenon of the change, the revolution and development of communication and electronic sciences, and the change that occur.

But you always blame us from very sectarian and dogmatic, and very self centered understanding. I try to have a serious debate and discussion with that kind of intellectual. Why we can't have multiparty competition? Why we have raised the questions of election constituent assembly. Why we participate in government and the radical change, and radical restructuring of the state.

Either we should support multiparty competition or not.
[unclear]

We devised this multi party competition while we were in the war. We were waging war and we were victorious at that time, you know.

At that time we have a serious discussion and what we devised is that if Lenin had lived another 5 or 10 years he would also introduce multiparty competition, this is my understanding. (Applause, few words from Prahanda unclear).. so creative and so dynamic that, during this New Economic Policy, just after the October Revolution and this War Communism had finished, and the civil war had finished, he introduced NEP, this NEP was in essence a capitalistic economic policy. He gave the slogan" Organize Socialist Competition in the Economy"… When he introduced the slogan of organizing competition in the economy. If he would have lived another 5 years he would have introduced competition in politics.

Therefore it is not something we are suprisingly making this multiparty competition. Because Stalin had made a serious mistake of ideology, in philosophy, in science- and all of the workers movement has taken so much loss from this deviation from dialectical materialism. This is our understanding — what we think and believe.

We are fully confident that we are developing the ideology from Lenin, not from Stalin. And this multi-party competiton is the product of that ideological development.

I think somebody in New York should have presented Prachanda with a copy of Grover Furrs Article "Stalin and the Battle for Democratic Reform" has he appears to be unaware of Stalin's struggle for Democracy in the USSR.