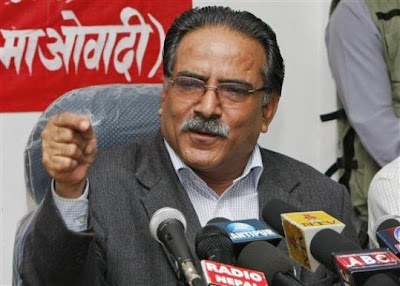 Nepalese Prime Minister Prachanda' says that his nation would not follow traditional parliamentary democracy. He is continuously experimenting to restructure the country's socio-economic fabric towards a new form of democracy aimed at peasants and workers. Prachanda was addressing a delegation of Indo-Nepal People's Solidarity Forum at the Nepalese embassy. Excerpts :

What will be the exact nature of your new democracy?

We know that formation of a communist republic is not possible in Nepal due to the current international scenario. Neither will we maintain a status quo in parliament. We are in constant search of a structure aimed towards workers and peasants. If we fail to do so, it will be unfortunate not only for Nepal, but also for India, South Asia and the whole world.

Will you review recruitment of Gorkhas into the Indian Army?

We are trying to review each and every treaty with India since 1950. Today, we will release a joint statement with the Government of India. Issues such as water resources, Gorkhas recruitment into the Indian Army, smuggling on the Indo-Nepal border will be considered. I assure you that status quo will not be maintained regarding these issues.

What do you have to say about Indian Maoists and terrorist attacks?

Indian Maoists are on their own way and we have no right to dictate to them. We have created a balance between political and military offensive to reach this stage of peace in Nepal. If they or any other Maoist party in any part of the world feels that our strategy was relevant, they are free to appreciate it. Each and every country's internal situation is completely different and their is no common blueprint for change. No need to say that we will have to fight terrorism.

Do you see formation of any South Asian level communist organisation, as they have done in South America?

We want a union to be formed at the South Asia level. We plan to call a conference of all Maoist parties of the world in the near future to create solidarity and lend a helping hand to the transitional phase of ideology, philosophy and science with which we are in continuous experimentation in Nepal. We are playing a very risky game, but we are confident.

What was the delay in government formation?

During the four months of negotiations with other political parties, we witnessed a new form of class struggle where every single party wanted to defend its class interest. They could not dream of the CPN (Maoist) coming to power. The pressure of the Nepalese masses which defied them.

What do you have to say about the apprehensions in that CPN (Maoist) is heading towards revisionism?

We are neither going towards parliamentary democracy, nor trying to revive any traditional form of democracy in Nepal. In the current international political scenario, we have to make a breakthrough on the basis of revolutionary and reactionary political tradition of the 20th century, right from the October revolution to Chinese revolution.

Concrete analysis of the present situation will chart out a way for new Nepal. When we concluded a 12-point agreement, three years ago, and continuously stressed on the formation of constituent assembly, our masses knew very well that this was a strategic compromise, not defeat. Time has proved that we were right in our approach. Basically, every ideology and science has to change with changing times. What we are doing is just an ideological and scientific experiment which is very risky.
Posted by nickglais on 9/17/2008 07:28:00 AM

the last statement put shivers to my veins. Is he talking like "Maoism with Chinese characteristics"?

Thank Mao Nepal Maoists was fast enough to hold his revisionist betrayals to the Nepali comrades.