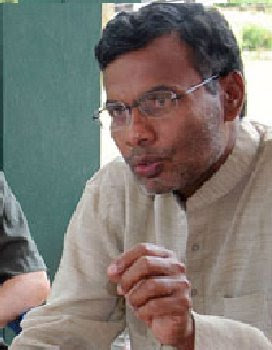 KATHMANDU, Sept 19 - Minister for Land Reforms and Management Matrika Yadav resigned from his post, on Friday, refraining from the Maoist central secretariat’s directives to publicly apologise for his involvement in the Siraha land seizure.

Minister Yadav tendered his resignation to Prime Minister Prachanda, who is also the chairman of the CPN-Maoist, immediately after the meeting today.

In his resignation, Yadav accused the CPN-UML an the MPRF—other main partners of the Maoist-led coalition government— of being anti- people and claimed that the UML appointed an Indian national as minister. He further stated that the government took to suppression of the Dalits and landless squatters and demolished the huts they built in the land of former royalty Mohan Shahi.

Amid this situation when it is not possible to work to achieve the aspirations of the People’s War and the People’s Movement, fulfill the martyr’s dream and accomplish the party’s commitment, my morality does not let me to remain in the post of the minister, the resignation addressed to the PM reads.

Earlier, the secretariat meeting held at the Prime Minister’s Residence in Baluwatar concluded that Minister Yadav’s obstreperous participation in the seizure of the private properties at Mirchaiya VDC in Siraha district was against the party policy. At the meeting, Yadav defended himself and claimed that he did not do any mistake.

Talking to the Kantipur FM after resigning, Yadav claimed that he was not directed to apologise.

“The party only suggested me to introspect. However, I decided to resign for the ease of the party to carry on the equation,” he said.

He further warned of an accident if the Dalits and landless squatters who have been occupying the land are evicted again.

When PM Prachanda was in India tour, Yadav had locked the horns with Acting Prime Minister and Home Minister Bamdev Gautam and the MPRF and recaptured the private plots of land and property immediately after the police administration demolished the huts built in the land and removed the forceful occupants.

The Maoists had distributed the land belonging to Birendra Sah, an MPRF supporter, to the Maoist cadres and landless squatters earlier.

Claiming that he was working for the people, Yadav yesterday had accused the home minister of being influenced by the ‘land-mafia’ and meddling with the prerogative of another ministry.

Democracy and Class Struggle would like the CPN Maoist to clarify its land to the tiller policy in view of resignation of Matrika Yadav.
Posted by nickglais on 9/19/2008 03:16:00 PM

While the Maoist project of ‘New Democracy’ based on the Stalinist ‘two stage theory’ unveils itself as a pure and simple bourgeois venture, the Maoists of the world who till yesterday hailed Comrade Prachanda as great revolutionary, have started to accuse him personally for misdirecting the project of ‘New democracy’. The fact, though remains, that Prachanda is a mere executor of this bogus programme, stemmed in the historic miscarriage of revolutions in China, Spain and elsewhere. It is not Prachanda but Mao himself who in his famous pamphlet ‘On New Democracy’ has given false and unrealizable preaching for preservation of private capitalist enterprise in cities and the rich peasant economy in villages, in the first stage of revolution in China, i.e. the New democratic stage. Maoists, in their striving to evade this aspect of the matter, are presenting fictitious analysis of apparent debacle in Nepal. The truth is that Prachanda, avowed disciple of Mao, is not deviating from the Maoist venture of ‘New Democracy’, rather is striving to implement the same in letter and spirit. It is though, different matter that the world we live in, is no more structured to hide the real dynamics of this fiction of ‘pink revolution’.