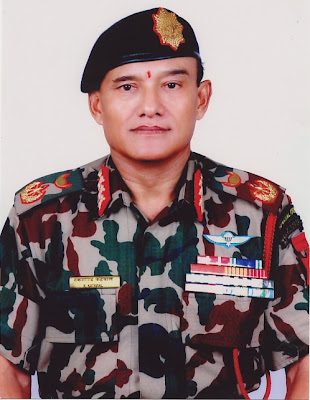 Prime Minister Prachanda has indicated that he will not take any action against the Nepali Army chief General Rookmangud Katawal.

"From my side, there will not be any prejudice against him or the security bodies," PM Prachanda told BBC Nepali Service in an exclusive interview, Monday.

He was replying to a question on what he will do to the army chief as he used to be critical about him in the past.

The Prime Minister also said that he attaches high sensitivity to the process of integration of army and will proceed very carefully in that regard.

He also said that the new government will soon decide how long to allow the ex-King Gyanendra to stay in Nagarjuna palace. The ex-King had been provided the palace by the previous government after he exited from Narayanhity palace.

Asked if he ever feels there are bloods in his hands, Prachanda – who had led 12-year-long violent insurgency that took the lives of around 15000 people - said he does feel so but is overwhelmed by the feeling of achievement in terms of numerous positive transformations the movement has brought about in the country.

The full interview will be broadcast by BBC Nepali Service on Tuesday night. The interview can then also be accessed at its website www.bbcnepali.com
Posted by nickglais on 9/02/2008 04:08:00 AM