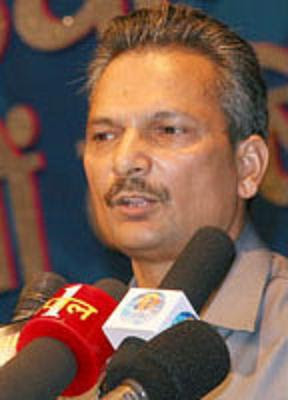 Presenting the first budget of the Maoist-led government, Finance Minister Dr Baburam Bhattarai is widely expected to put forth an ambitious and inflated budget.

Finance Minister and senior Maoist leader Dr. Baburam Bhattarai. (File photo)
Even as government sources have said that the budget size could reach Rs 240 billion this time – up from Rs 170 billion in the previous fiscal year – the Finance Minister has promised to remain within 'acceptable limits.'

"Since it is going to be the first budget after establishment of republic, many people have many expectations. Therefore, the budget size will be big. But we will remain within acceptable limits taking the ground reality into consideration," Dr Bhattarai said on Thursday.

He has also promised not to increase tax rates. "We do not want to raise tax rates unnecessarily. Rather, we will focus on controlling revenue leakage and expanding tax base since we need the support of private sector to meet our targets," he said.

Economists have expressed concerns over the likelihood of inflated budget. "We can assume that the government wants to bring in an inflated budget. If that happens, then that could spiral the already worse inflation situation as well as push budget deficit beyond our capacity," said Dr. Bishwambher Pyakuryal.

Dr. Bhattarai, unveiling a white paper of the economy on the eve of budget presentation, said that the situation of economy is poor. "It is the reality that despite some economic growth, there is increasing inequality and poor shape of manufacturing sector and industries," he said.