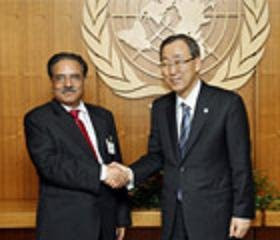 Prime Minister Prachanda held a meeting Saturday with Secretary General of the United Nations Ban Ki-moon at the UN Headquarters in New York.

During the meeting, Ban Ki-moon congratulated the PM for the historic political transformation and achievements in peace and democracy that has taken place in Nepal. In reply, Prachanda expressed his thanks to the Secretary General for his continuous support in the peace process of Nepal and for his positive reference about Nepal in his report to the General Assembly.

According to the Permanent Mission of Nepal to the United Nations, the UN Secretary General assured of the United Nations' continued support in the days ahead and expressed his readiness to assist in the socio-economic development in Nepal. The Secretary General also appreciated Nepal's continued participation in the UN peacekeeping operations while the PM reiterated Nepal's commitment to continue providing troops to UN peacekeeping missions at the call of the UN.

At the meeting, PM Prachanda expressed his commitment to move ahead in the spirit of the Comprehensive Peace Accord and to all the agreements reached to bring the peace process to a logical conclusion.

PM Prachanda also extended an invitation to visit Nepal to which Ban Ki-moon assured that he would visit Nepal soon.

Additionally, the PM also held meetings with President of Pakistan Asif Ali Zardari and deputy Prime Minister and leader of delegation of Vietnam Pham Ghia Khiem. Matters of bilateral and mutual interest were discussed with the Pakistani president while means and ways of expanding bilateral relations was discussed with the Vietnamese DPM.

PM Prachanda also attended an interaction programme organized by the Nepali community organizations based in New York, according to the Permanent Mission of Nepal to the United Nations
Posted by nickglais on 9/28/2008 03:21:00 AM