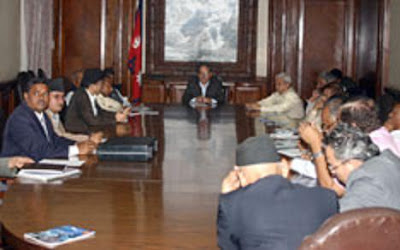 Prime Minister Prachanda holding interaction with leaders of different political parties including the main opposition, Nepali Congress, at his office on his upcoming visit to India, on Thursday,

Speaking at the interaction held at his office in Singha Durbar, Prachanda said it would be a goodwill visit to the southern neighbour. He revealed that there's no plan to sign any bilateral agreements with New Delhi.

According to Prachanda , the visit is basically aimed at further consolidating the traditional relations between the two countries, and build confidence. Saying that the government wants to collaborate with all the parties in the Constituent Assembly, the PM also underlined the need for political consensus on foreign policy and other matters of national interest.

At the interaction, leaders of some parties advised him not to compromise national interest while dealing with the Indian side regarding major bilateral issues. Some leaders are learnt to have suggested him to propose a review on 1950 Friendship Treaty while others asked him to discuss a solution to the tragedy caused by the Koshi dam in eastern Nepal as well as the border issues.