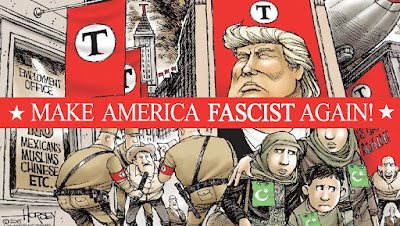 Trump's victory is not an anachronism. USAmerica has always been a settler-colony par excellence,more muscular in its colonialism and white supremacy than Canada and even the late British Empire, and so the emergence of a fascist figurehead is in fact a consummation of what that country has always been.

Trump represents a certain apex of what this national project's essence, though stripped of its liberal pretensions.

The fact that a rich rapist who was successful only insofar as his dad loaned him money––who pretends to be a self-made man despite having weathered bankruptcy because of his inheritance––and because he was a media spectacle, and yet at the same time could pretend he was the accomplishment of the American Dream demonstrates that this dream is not only vacuous but that it is in fact based on the reality of Founding Fathers: wealthy, slave-owning, settler aristocrats who liked to proclaim their colony's "greatness" while pursuing the most egregious assaults upon humanity.

Trump is no different from the white supremacist privileged fuckers who founded America: he is the senile, virulent face of this same USAmerica in its cancer stage.

Founded upon colonial genocide and slavery, the US social formation has never divested itself from this history. The liberal panacea to reactionaries such as Trump has been the kind of remedy that valorizes the Trumps of the world: uphold a mythic and tolerant US while bombing the shit out of the rest of the globe, drift further towards the right in order to win and keep settlerism normative, target the movements of your own colonized people to maintain the status quo, worry about the Donald Trumps when your politics in practice aren't an alternative, blame those who see no alternative as the reasons for the fascism that you yourself refused to oppose.

Before Trump's election Obama, who is arguably more "left" than Clinton (though using the qualifier "left" in this comparison is gross), refused to endorse Black Lives Matter and instead threw his weight behind a "Blue Lives Matter" politics right when the Charlotte uprising happened. No real opposition, no future beyond capitalism.

In the past fascism emerged in the openings produced by liberalism: in Germany it was the SDP (which was even more, far far more, to the left of Obama) that put down a worker's insurrection, handed Rosa and Karl over to the paramilitary, and paved the way for Nazism by neutralizing all resistance.

But in USAmerica this neutralization is easier to achieve because its racist/settlerist ideology is in fact much stronger than the reactionary impulses of pre-Nazi Germany.

The weirdness of Trump's victory is not that a fascist won but that those panicking about his victory, who were panicking about the potential beforehand, refuse to grasp the underlying logic.

In this election the difference between Trump and Clinton was miniscule; the choice was between a Mussolini or a Reagan.

The fact that those still invested in USAmerican electoral democracy could not grasp that this choice demonstrated a deficiency in their system––could not ask the hard questions about what led them to this place, what was necessary to rupture from a state of affairs that was already the germ of fascism––demonstrates the power of US democratic ideology.

For if you believes that the nation was great from its inception, that the American War of Independence was simply an impure revolution that actually mattered, and that the US is the best place on earth in which to live and think, then you must accept that its elections matter.

The logic promoted by this belief is that, regardless of how imperfect the democratic choice might be, one must still participate in the electoral circus and in this participation hopefully stave off the possibility of a Trump coming to power––that an anti-fascism can be expressed by an appeal to the nation's liberatory essence (the contested "American Dream" which is indeed a dream inasmuch as it is sheer fantasy) rather than in the streets where, to puncture this fantastic bubble, real politics are in fact made.

Thus, from the beginning of that phase of the US electoral circus where Clinton and Trump were forced into confrontation, the narrative was not about concretely confronting the fascist movement that had elevated someone like Trump in the streets through extra-parliamentary organizing (which is the only way in which anti-fascism has ever been successful) but instead about registering an anti-fascist attitude in the vote.

The discourse became weirder when liberal zealots disdained the violence of anti-fascists who were physically confronting Trumpites, demanding that all responses to this emergent event they deemed heinous should happen only according the convention of voting.

The obvious problem was that this convention is in fact rigged and has been rigged since the patrician founding fathers who loved their slaves and exhorted their plebeian settler counterparts to slaughter the original inhabitants of the land.

This was not a system that resulted in the end of slavery or the amelioration of Jim Crow: these advances were the result of extra-parliamentary unrest.

With this in mind, devotion to an electoral system that hasn't been ideologically altered since the days of the Founding Settlers is in fact devotion to a mechanism that will have no problem with fascism.

Voting in the US has always been participation in a kind of fascism, whether it be the ur-fascism of yesterday or an open and unapologetic fascism of today.

The fact that around 50% of US citizens did not vote should be treated, if we were to be logical, as evidence that the system is being boycotted by the majority of the people who didn't see a significant difference between Trump and Clinton.

Liberals worried about a fascism that they never cared to confront where it mattered in the streets will of course blame these non-voters for Trump.

Not themselves, not that they courted a system that would allow the worse kind of choice, not that their heroes Clinton and Obama are planning to gracefully submit so as to preserve USAmerican democracy.

No, the problem are these people who did not vote.

Liberal white supremacists such as Amy Schumer went so far as to release election videos ahead of time designed to shame people for not participating in the circus; she was under the impression that the act of voting was a higher good than the content of voting, this kind of democracy must be preserved.

But why didn't half of registered voters (let alone those who were not registered, who could not register) participate in this election? What is their demographic? The most oppressed and marginalized are not voting because their day-to-day existence has been the same no matter who is in power.

Nearly half of the people living in the US did not participate in the circus because its decision would not change the fact of their oppression/exploitation.

Up here in Canada we have a similar situation, and when we ask people why they don't vote their responses are clear: because we're still assaulted by the pigs no matter who's in power.

But forget all this: Trump is in power, now what? Unfortunately this now what is stymied by the logic of electoral pseudo anti-fascism.

All these liberals who demanded that everyone vote for Clinton so as to stave off the Trump alternative (even though it mattered little to the people being murdered and colonized at the time) do not seem to be interested, because they rarely are, in concretely opposing fascism.

They did their duty by voting; now that this failed they can retreat, complain that others ruined things for them, and just accept the rules of the system––and of course they'll accept this because they were always apologists for this system.

All those liberals who complained about fascism, some of whom mocked actual anti-fascists for confronting Trumpites violently in the street, are now threatening to ignore politics for the next few years, become ex-pats (because they have the economic privilege to do so), and grudgingly play along with the system they spent a year endorsing.

Yet again, let's roll things back to the Founding Fathers that Trump wants to make great again. The reason why US liberalism cannot ever be anti-fascist is because it has not divested itself of its founding mythology, the belief that it is the centre of global reality and has had a progressive influence in the development this reality.

The truth is that the US has in fact been a reactionary and retrograde influence, that it has only been the leader of global oppression/exploitation, no matter how hard it tries to reconceptualize its founding mythology.

Once you understand what USAmerica is and has always been, Trump is not surprise––nor should the narrowing of electoral options between Clinton and Trump be a surprise––but in fact a noxious individual who would have been enjoyed by the Founding Fathers.

Give it ten or twenty years and, if USAmerica had not collapsed under the weight of its multiple shitty contradictions,

Trump will be sanitized and added to the cast of Hamilton.

fascism, xenophobia, and demagoguery are as American as genetically modified apple pie.