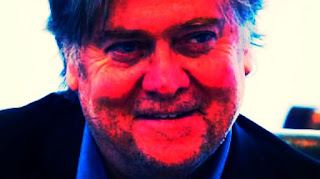 Democracy and Class Struggle says the Nazis Stormfront says "it does not get better than this with the appointment of Steve Bannon " by Donald Trump - we publish the following text from New York Times for you too expose the game Donald Trump is playing with his Bannon card.

DAVIS: You hired Steve Bannon to be the chief strategist for you in the White House. He is a hero of the alt-right. He’s been described by some as racist and anti-Semitic. I wonder what message you think you have sent by elevating him to that position and what you would say to those who feel like that indicates something about the kind of country you prefer and the government you’ll run.

TRUMP: Um, I’ve known Steve Bannon a long time. If I thought he was a racist, or alt-right, or any of the things that we can, you know, the terms we can use, I wouldn’t even think about hiring him.

First of all, I’m the one that makes the decision, not Steve Bannon or anybody else. And Kellyanne will tell you that.
[laughter]

TRUMP: And if he said something to me that, in terms of his views, or that I thought were inappropriate or bad, number one I wouldn’t do anything, and number two, he would have to be gone.

I’ve known him for a long time. He’s a very, very smart guy. I think he was with Goldman Sachs on top of everything else.

UNKNOWN: What do you make of the website he ran, Breitbart?

TRUMP: Well, Breitbart’s different. Breitbart cover things, I mean like The New York Times covers things. I mean, I could say that Arthur is alt-right because they covered an alt-right story.

SULZBERGER: [laughing] I am, I am. I’ll take whatever you say. I am always right, but I’m not alt-right.
[laughter, cross talk]

He’s done a good job. He hasn’t been with me that long. You know he really came in after the primaries. I had already won the primaries. And if I thought that his views were in that category, I would immediately let him go. And I’ll tell you why. In many respects I think his views are actually on the other side of what a lot of people might think.

DAVIS: But you are aware, sir, with all due respect, that African-Americans and Jews and many folks who disagree with the coverage of Breitbart and the slant that Breitbart brings to the news view him that way, aren’t you?

TRUMP: Yeah, well Breitbart, first of all, is just a publication. And, you know, they cover stories like you cover stories. Now, they are certainly a much more conservative paper, to put it mildly, than The New York Times.

It’s very interesting ’cause a lot of people are coming to his defense right now.