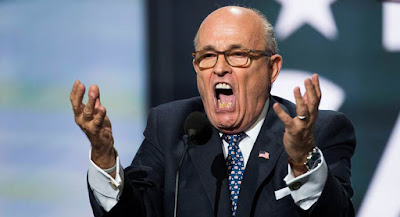 If former New York City mayor Rudy Giuliani is appointed the US secretary of state he will probably follow on Hillary Clinton’s war policies with Russia in Syria, and will try to undermine the Iran nuclear agreement, an American scholar and political analyst says.

James Petras, a professor emeritus of sociology at Binghamton University in New York, and adjunct professor at Saint Mary's University in Halifax, Canada, made the remarks in an interview with Press TV on Friday.

According to reports, a battle has erupted in Trump's camp over his pick for the secretary of state, with loyal supporters seeking to block the appointment of Mitt Romney, a fierce critic of the president-elect during the 2016 presidential campaign.

The debate over selecting the head the US State Department has led to an internal dispute in Trump’s team between supporters of Romney, those favoring Giuliani and others who believe Trump should keep searching for candidates.

Professor Petras said, “Romney is less bellicose at least in his rhetoric, and probably and much more in line with the general outlook of the Conservative Republicans. “

“However, I think that it’s a question also of how Romney will interpret his appointee. If its Romney, he will have to pressure him to begin relations with Russia, and perhaps to negotiate a settlement with Syria,” he stated.

“He will also probably continue with the agreement with Iran, but he will try to modify some of the sanctions, which will be very provocative to the Iranians, even though he will support the Romney appointment,” the analyst said.

“If he goes with Giuliani he will have to make adjustments to Giuliani’s violently pro-Israel line, which would push for breaking that agreement despite the fact that five other countries will not follow on it, and it will isolate the US,” he noted.

“Probably Giuliani would follow closely on Hillary Clinton’s war policies with Russia in Syria and will continue to encircle China,” the scholar explained.

Iran and the five permanent members of the UN Security Council -- the United States, Britain, Russia, China, France as well as Germany --started implementation of the deal, dubbed the Joint Comprehensive Plan of Action (JCPOA), on January 16.

Under the JCPOA, all sanctions imposed on Iran by the European Union, the UN Security Council and the US have to be lifted as Iran limits some aspects of its peaceful nuclear program.

It seems Trump’s election as the next president of the US has allowed Republicans to take a more aggressive stance against Iran.

Trump said during his election campaign that he would “dismantle”, “tear up” or try to renegotiate the terms of the nuclear deal if elected president.

Iranian officials have warned the US against walking away from the nuclear agreement, stressing that any US president is bound to honor the deal as it has been endorsed by a United Nations Security Council resolution, which makes it effectively an international law.