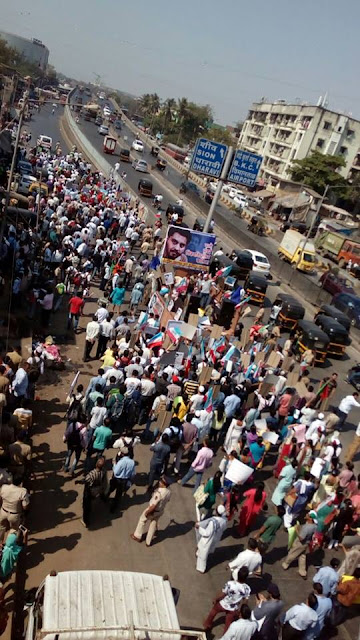 SALUTE HEROIC PROTEST OF JOINT ACTION COMMITEE FOR SOCIAL JUSTICE IN MUMBAI  AGAINST THE KILLING OF MUSLIM STUDENT NAJEEB IN JAWAHARLAL NEHRU UNIVERSITY.PROTEST SYMBOLIZES THE VOICE AGAINST THE FASCIST HINDU COMMUNAL R.S.S.FORCES PREVALENT TODAY UNLEASHING TERROR ON THE MUSLIM MINORITY AND FULLY BACKED BY THE RULING MODI GOVT.

Today a rally of around 600 people from a huge range of organizations comprising the Joint Action Commitee for Social Justice staged a march in Mumbai city from Kurla station to Kalina University campus protesting against the death of Student Najeeb ,from the Jawaharlal Nehru University.

All vehemently condemned the fascist tyranny of Narendra Modi's pro-R.S.S.government which deployed ideology of Hindutva like a sword and bled the hearts of the Muslim and dalit communities.

The leaders of all the groups submitted a memorandum to the vice-chancellor demanding a proper enquiry into the incident.

The nexus between the pro-corporate and Hindu fascistic policies were amply elaborated and Prakash Ambedkar ,leader of R.P.I.concluded the meet.

Although only around 500 the rally symbolized the burning hearts of youth against the fascistic injustice perpetrated on students like Najeeb .

Copies of pro-dalit 'Aagahz' magazine was sold that represented the voice of the dlait and other opressed students and youth.

Such gatherings reflect that the youth will not take Hindu fascism lying down.

Also heartening to see so much enthusiasm in Muslim Youth  and from students of Tata Institute of Social Sciences.

Such meets sow the seeds for burning a flame against the forces of Hindu communal fascism
Posted by nickglais on 11/24/2016 01:48:00 PM