INDIA: SALUTE HEROIC PROTESTS IN DISTRICTS OF PUNJAB TO BRING THE KILLERS OF GURDEV KAUR TO THE BOOK SAYS HARSH THAKOR 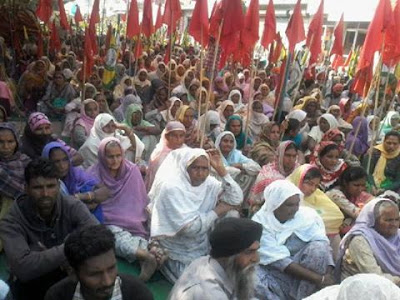 SALUTE HEROIC PROTESTS IN DISTRICTS OF PUNJAB TO BRING THE KILLERS OF GURDEV KAUR TO THE BOOK .

A SPARK HAS BEEN TURNED INTO A PRIARIE FIRE.BY THE VALIANT EFFORT OF THE JALOOR JABBAR VIRODHI ACTION COMMITEE..

MAY THE COUNTER RESISTANCE OF PRO-LANDLORD GANGS BE FOILED

A protracted struggle demanding justice to gurdev kaur and punishment to the killers was launched in 5 districts of Punjab today.

An effect of thunder and lightning was created by the protesters and the venues resembled  many streams converging into an ocean..Simultaneously for the last 5 days a gherao of minister Parminder Dhindsa has been staged and relentlessly the protesters continued the protest.

Outside the very venue protesters burnt an effigy of the minister 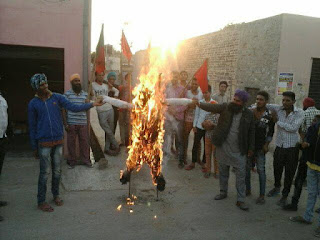 Still criminal politicians like Karnal and Mangu have to be brought to the book.

A counter anti-dalit  protest was lodged by the village landlord gangs backed by the ruling Akali Dal party.

They threatened all the Jaloor Jabbar Virodhi action committee protesters with dire consequences.

The dalit labourers now have to arm themselves to combat this counter offensive.

A big rally is planned on November 24th to combat the criminals.in Sangrur.

All democrats must salute the protesters for displaying death defying courage .Youth have displayed great resilience and enthusiasm.
Posted by nickglais on 11/22/2016 09:57:00 AM