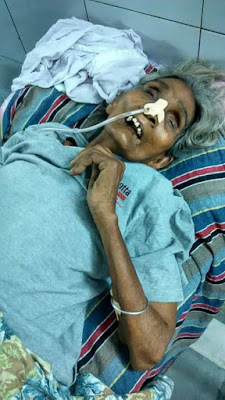 A PROPER POST MORTEM OF VICTIM GURDEV KAUR MUST BE INITIATED.THIS STRUGGLE IS A WATERMARK IN THE HISTORY OF THE REVOLUTIONARY MOVEMENT AND ALL DEMOCRATS MUST CONGRATULATE THE JALOOR JABBAR VIRODHI ACTION COMMITTEE AND THE ZAMEEN PRAPT SANGARSH COMMITTEE FOR MAKING SUCH PAINSTAKING EFFORTS IN SOWING THE SEEDS FOR THE ULTIMATE EMANCIPATION OF THE LANDLESS LABOURERS.VIRTUALLY AN OCEAN HAS BEEN CREATED IN THE PROTEST AREA FOR FOUR DAYS WITH OVER THOUSAND PARTICIPANTS EVERY DAY AND LEADERS VOW THAT THEY WILL NOT YIELD TILL THEIR DEMANDS ARE FULFILLED.

A massive protest has been launched  by the Jaloor Jabbar Virodhi action Committee  in Sangrur district headquarters for 4 days over the issue of the death of comrade Gurdev Kaur in the P.G.I.  in Chandigarh

Her eventual death was a part of the assault  carried out by the village landlords supported by the police force in Sangrur where dalit labour struggle was occurring.

Over 1000 participants have thronged the Sangrur district headquarters everyday like silent streams turning into a turbulent  ocean.

All the leaders vowed to fight for justice till the last breadth and not relent.The Leaders of the agitation plan to launch a gherao of Minister Parminder Singh Dhindsa ,responsible for the assault and death of the victim..

The demand for the release of 18 dalit activists  arrested to be released was raised and that till the killers were brought to the book no  post-mortem for martyred Gurdev Kaur. would be permitted.

Happily the release of the 18 detained dalit leaders was just announced yesterday.

The joint collective effort of organizations representing different trends is of great significance.

Let us pledge that the protest continues like a boulder resisting a gale and shimmers the light  of resistance and liberation all over the country.

Here is an ideal illustration of the connivance of the administration with the landlord class and how village landlords are an agent of the state repression on the whole.The nexus of ruling classes and state against the landed dalit labourers is a phenomenon to be studied.Vishav Bharti 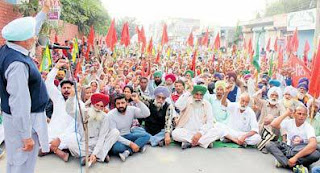 Dalits in Sangrur’s Jaloor village were attacked and videos of their thrashing posted on the social media, says a report by the Jaloor Anti-Repression Action Committee comprising 10 organisations. Blaming the landlord-politician-police nexus, it accuses Punjab Finance Minister Parminder Singh Dhindsa and a former CM of supporting the village landlords.

On October 5, members of the Zameen Prapati Sangharash Committee (ZPSC), demanding that 16 acres of the village common land, reserved for Dalits, be allotted to them on lease,  were attacked while they were returning to Jaloor village after a protest in Lehragaga.

As many as 24 persons from both groups were injured in the clash.

One of the victims, Gurdev Kaur, died at the PGI on Saturday.

The report claims that it was owing to the support of influential politicians that the assailants, booked for attempt to murder, had not been arrested so far whereas the police had put 17 Dalit labourers behind bars.

The report says not only was property belonging to Dalit labourers damaged, but Dalit women molested too.

Rajinder Kaur Bhattal said she had visited Jaloor only to broker peace between warring parties. Dhindsa was not available for comment.

Sangrur: As many as 17 Dalits, who were in Sangrur district jail since October 6 after a clash between Dalits and landlords on October 5, were released this evening.

They were later taken to the dharna site outside district administrative complex here.

Mukesh Malaud of the Zameen Prapati Sanghrash Committee said with the release of 17 Dalits, one more demand of the committee had been fulfilled.
Posted by nickglais on 11/17/2016 11:43:00 AM