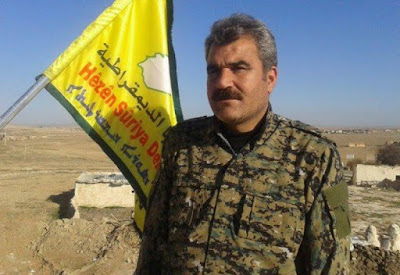 How do you evaluate the YPG forces withdrawing to the east of the Euphrates after training the Manbij Military Council fighters? Despite the YPG withdrawing, what does the Turkish army’s attacks on Manbij's villages mean?

The YPG’s withdrawal from Manbij took place as a result of the agreement with the international coalition powers. According to this, the YPG has fulfilled their promise. By fighting against terror heroically as the forces of the Syrian people, they have fulfilled their duties. The claims against the YPG which say that the YPG are not the forces of Syria is unfounded and immoral. The YPG forces have proven that they are the defense forces of the Syrian people by completing their moral and humanistic duties. They are not like the other forces who have slaughtered and used violence against the Syrian people.

The YPG’s withdrawal from Manbij did not work in the AKP/MIT's [Turkish government and Turkish Intelligence Service] fovour and the gangs that are part of the ‘Euphrates Shield’. For this reason they have turned the YPG’s withdrawal into an opportunity, carrying out practises against this and wanting to crush the Manbij Military Council forces which have rescued Manbij and its countryside from Daesh [IS/ISIS] gangs. According to the Turkish state, the fighters of the Manbij Military Council cannot fulfill their duties of defending [the region] on their own.

How were the Turkish state’s attacks? What kind of weapons were used in the attacks and which Manbij Military Council bases were targeted?

The Turkish state has used every technique possible to achieve their conspiratorial plans. Warplanes, tanks and artillery shells were used in these attacks. Many points under our control in western Manbij were shelled. In these attacks the villages of ?êx Nasir, Qert Wêran and Îlan were targeted. Some civilians were injured as a result of attacks whilst there was also a great damage to property. One of our fighters was martyred and two were injured in the Turkish state’s attacks. Our forces responded to the attacks and one tank used by Turkish-backed gangs was destroyed, many gangs were killed. Our forces are in a good position at the moment. The occupying Turkish army and affiliated gangs cannot enter the area.

Despite YPG forces withdrawing from the region, the Turkish state continues to attack the region, what does this mean?

With these attacks the Turkish state and affiliated gangs have shown their actual intentions and their inaccurate claims have been revealed. They are after occupying our region whilst claiming that they are fighting Daesh gangs. Their only purpose now is to occupy Manbij. They want to commit massacres here, they want to commit inhumane practises.

How do you evaluate the approach of the international coalition against the Turkish state’s attacks after YPG withdrawal from Manbij?