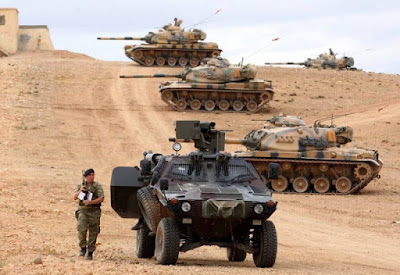 “The AKP [ruling Justice and Development Party in Turkey] and its allies try to hit the Kurdish forces in Syria in support of ISIS terrorists,” he said.

The YPG leadership said the Turkish bombardment on Ain Diwar continued for one hour, adding they responded to the offensive.

“Our forces responded to the attack by launching several shells, targeting the source of the fire. Only then the Turkish offensive stopped.”

Scores of YPG fighters were wounded in the bombardment, and a mhassive material damage was reported due to the attack.

This is not the first time Turkey has targeted Syrian Kurds.

According to military sources, the Turkish Army has launched more than 22 attacks on Kurdish positions in northern Syria.

The YPG said that Turkey is targeting Kurdish areas in northern Syria “to undermine the Kurdish progress against ISIS.”

“We’ll not allow Turkey to continue those violations at the border. We are ready to respond and we’ll do whatever it takes in order to stop this offensive against our people,” the YPG leadership said in an earlier statement.