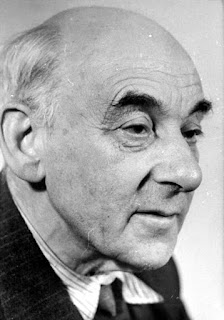 A confused state of mind, equally close to sickness and criminality, was for twelve years [of Nazi rule] held to be the greatest virtue.

Victor Klemperer, a  Jewish philologist who survived the Nazis,  kept a journal which, after the war, he turned into a notable book called “The Language of the Third Reich: A Philologists's Notebook” (1947). He coined the ironic, bastardized phrase, “lingua tertii imperii”, to describe the damage the Nazis did to the German language.

Klemperer described the Nazi modification of language and its effects:

"No, the most powerful influence was exerted neither by individual speeches nor by articles or flyers, posters or flags; it was not achieved by things which one had to absorb by conscious thought or conscious emotions.

Instead Nazism permeated the flesh and blood of the people through single words, idioms and  sentence structures which were imposed on them in a million repetitions and taken on board mechanically and unconsciously. . . language does not simply write and think for me, it also increasingly dictates my feelings and governs my entire spiritual being the more unquestioningly and unconsciously I abandon myself to it.

And what happens if the cultivated language is made up of poisonous elements or has been made the bearer of poisons? Words can be like tiny doses of arsenic: they are swallowed unnoticed, appear to have no effect, and then after a little time the toxic reaction sets in after all.

The Third Reich coined only a very small number of the words in its language, perhaps - indeed probably - none at all. . . But it changes the value of words and the frequency of their occurrence, it makes common property out of what was previously the preserve of an individual or a tiny group, it commandeers for the party that which was previously common property and in the process steeps words and groups of words and sentence structures with its poison"

Here are some of the key poison terms in the Alt Right language.

Beta: Members of the alt-right are obsessed with masculinity, manhood, gender roles and the concept of "alpha" and "beta" males. Alpha males are leaders, like Trump; beta males are portrayed as weak and emasculated.

Crybaby, whiny: Anyone who disagrees with them or their preferred candidate, particularly protesters and people who say that the alt-right is embracing racism and anti-Semitism.

Human biodiversity: Despite the fact that  racism is at the heart of its platform, the alt-right is very sensitive about being called racist.

They use the term “human biodiversity” as a more scientific-sounding way of referring to issues of race.

Libtard: The alt-right revels in the rejection of "political correctness," so embracing an outdated term for a person with an intellectual disability ("retard") serves the purpose of insulting liberals.

Masculinist: A word meant to embody the opposite of feminist, celebrating “manliness” and the traditional “heroic” nature of men.

To the alt-right, "masculinist" principles are ones that serve and advocate for men. Critics say they primarily reinforce antiquated gender roles.

Memes: The modern alt-right originated in places like 4chan and 8chan, which are hubs for meme creation. Meme creation is still a centerpiece of the movement. The alt-right is responsible for getting the Pepe the Frog meme classified as a hate symbol.

Multiculturalism  A major component of the alt-right platform is white supremacy and nationalism. "Multiculturalism" is used as a negative term for the blending of multiple cultures, as opposed to celebrating the supposed superiority of Western European culture. . Often used as shorthand for policies that benefit immigrants and people of colour.

Neoreactionaries: Also known as NRx and the "Dark Enlightenment." A group of people who call for stripping away anything other than supposedly rational thought, as opposed to a “feelings first” mentality. They advocate for libertarianism, traditional gender roles and neofascism.

Snowflake: Short for "special snowflake," a pejorative for an entitled person. Most people protesting Trump are "snowflakes," according to the alt-right, as are anti-Trump celebrities and most liberals.

SJW: Short for "social justice warrior," this insult is mostly reserved for young women who try to argue on behalf of liberal or feminist ideas.

White genocide: What many alt-right members feel is the natural conclusion of liberalism and pro-immigrant policies.

The alt-right views just about anything that benefits nonwhite people, particularly ones who aren't American citizens, as a risk to whiteness and a step on the road to the eradication of the white race.


"What allowed...the degeneration of German speech, over the length of a half century, from the rich, imbricated, responsible pursuit of truth into the garbled, vulgarized German authorized and distributed by the Nazi press, Nazi literature, and official bureaucratic speech [?]

Such an inquiry would be illuminating, but ultimately ineffectual, since the debasement of language and the traducing of the psyche, dependent as it is upon the organ of speech, is a process observable in varying degrees in all western language.

Cohen, Arthur, The Tremendum, (Continuuum 1993). An extremely bitter interpretation of the Holocaust in history, from a Jewish theological perspective.
Cohen, pp. 7-8.

THE MASS PSYCHOLOGY OF FASCISM