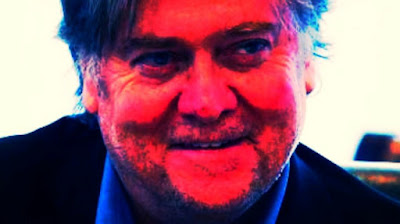 Democracy and Class Struggle says Steve Bannon regards the Neo Nazi Richard Spencer  as a leading intellectual of the Alt Right a movement he supported at Breitbart News.

So despite the soft denials of Donald Trump of  his Neo Nazis supporters the appointment of Steve Bannon speaks otherwise.


One of Donald Trump's first decisions as president-elect was to name Steve Bannon his chief strategist and senior counselor. Bannon managed Trump's campaign.

Before that he was the owner and hands-on force behind the website Breitbart News Network. Mainstream news and Bannon himself call Bannon's politics "conservative," "alt-right," or "white nationalist."

It's worse than that.

On June 17, 2015, Charleston, South Carolina: nine people at a Bible study class in the Emanuel African Methodist Episcopal Church were murdered by white racist Dylann Roof. Roof said he carried out the massacre to start a "race war" to turn America back to the days of open segregation.

He posed online with pro-Hitler symbols and a Confederate flag.

Part of the response, very broadly throughout society, was an eruption of outrage against the Confederate flags, flags of slavery and lynching.

Breitbart's response: an article headlined "Hoist It High And Proud: The Confederate Flag Proclaims A Glorious Heritage." Steve Bannon ran Breitbart when this article was published. He signed off on it, and as a hands-on editor likely instigated it. It begins:

The American left is in a feeding frenzy, cynically exploiting the tragic murders of nine black worshippers in a Charleston church to promote its agenda of cultural genocide against conservatism, tradition and the South.

The liberals feel they are on a roll, having trashed states' rights by railroading compulsory acceptance of homosexual marriage through the Supreme Court. Now, they feel, is the time to airbrush out of history every tradition that is an obstacle to their new, rootless, alien society based on intolerant political correctness.

The epitome of everything they detest and fear is the Confederate Flag, so that is now the target of a hate campaign so fanatical and irrational as to seem barely sane.
And this ends:

Those who initiated identity politics are attempting to obliterate the Southern identity. There is only one response: defiance. Every tree, every rooftop, every picket fence, every telegraph pole in the South should be festooned with the Confederate battle flag. Hoist it high and fly it with pride, it proclaims a glorious heritage.

A Violent Agenda Behind Demonizing All Muslims.
..
In a short stint as host of an influential radio show on SiriusXM radio, Steve Bannon put Pamela Geller on the air seven times. He called her "one of the top world experts in radical Islam and Sharia law and Islamic supremacism," "the top leading expert in this field" and "one of the great American patriots."

Geller's initial claim to fame was organizing a frenzied campaign against a Muslim Community Center near the site of the September 11 attack on the World Trade Center, claiming—without any evidence—that the center would be a "victory mosque" for Muslims on "conquered land" to celebrate the attacks. Geller calls Islam (all Islam) "the most radical and extreme ideology on the face of the earth." She says "Hussein [how she refers to Barack Obama] is a muhammadan [a follower of Mohammad]. He's not insane ... he wants jihad to win."

This is not just poisonous lunacy. There is a logic and agenda behind whipping up a climate of mass ignorance, hatred and fear of all Muslims. Where this is all aimed at was revealed in Geller's response to a 2011 fascist massacre in Norway: A white supremacist Norwegian terrorist, Anders Breivik, killed 77 Norwegian people, overwhelmingly white teenagers, at a social democratic youth camp. These were people he blamed for what he claimed was the "Islamization of Europe."

After it was revealed that Breivik had cited Geller's writings 12 times in his manifesto, Geller denied any responsibility. But she said, "If anyone incited him to violence, it was Islamic supremacists." In other words, this massacre wasn't a fascist massacre, it was provoked by "Islamic supremacists." In other words: It was a legitimate response to the "Islamization" of Europe.

In terms that are carefully designed to fly under the radar of some, while connecting clearly and explicitly with, and mobilizing,a violent fascist social base, Bannon used an interview with Richwine to send this message: "The whole thing in Europe is all about immigration, it's a global issue today, this kind of global Camp of the Saints."

Bannon was invoking the book The Camp of the Saints, which depicts the overrunning of the white Western world by hordes of starving dark-skinned monsters from India and the Third World who take what white people have, with the complicity of weak liberal white "traitors" to Western civilization.

The title of The Camp of the Saints alludes to and mobilizes a violent Christian fundamentalist vision of the violent implementation of the Book of Revelations, and projects attacks on immigrants and a coming, decisive, cataclysmic war against them, as a clash of good (Christians) and evil (inhuman beasts). It has been compared to The Turner Diaries—which "envisions" a race war in the U.S. with fascist forces lynching Black people and whites who wanted integration.

A flashpoint in online degradation of women and online violence against women, was "Gamergate." This vicious campaign, which exploded in 2015, was a flood of viciously degrading attacks and terroristic threats against the very small number of prominent women in the video-game development community.

Male gamers attacked these women with online rape threats and death threats, and physically stalked and threatened them. "Gamergaters" attacked people who defended women online—calling in false hostage or terrorist threats and sending SWAT squads to storm their homes.

Milo Yiannopoulos is the technology editor at Steve Bannon's Breitbartsite. As such, he operated as point man in promoting "GamerGate" in terms that paralleled white supremacists upholding going back to the even worse old days of slavery. Yiannopoulos wrote that GamerGate was "where gamers fought back against the nannying, hectoring feelings police and were branded 'harassers' and 'misogynists.'"

And he wrote: "Women are—and you won't hear this anywhere else—screwing up the internet for men by invading every space we have online and ruining it with attention-seeking and a needy, demanding, touchy-feely form of modern feminism that quickly comes into conflict with men's natural tendency to be boisterous, confrontational and delightfully autistic." And, "Donald Trump and the rest of the alpha males will continue to dominate the internet without feminist whining. It will be fun! Like a big fraternity..."

Steve Bannon attacks climate science from a stated agenda that there is "an American industrial renaissance in front of us if we just get the government out of the way."

In the interview, Bannon dismissed warnings of climate change as a hoax, invoking as proof a TIME magazine cover, purportedly from the 1970s, as evidence that scientists once thought the world was entering into a new ice age. There was no such cover of TIME. Bannon called extremely modest government policies that promote alternative energy sources like wind and solar power "madness." And he called proponents of any government support for alternative energy "pure scum."

Bannon and the Breitbart website are deeply steeped in anti-Semitism—which channels the discontent of sections of people into blaming the Jews, based on lies and concocted conspiracy theories, in ways that historically have led to violent slaughter.

Sometimes this takes the form of "dog whistle" messages, where those who have been conditioned to think in anti-Semitic conspiracy theories "hear" the message while others don't.

After Steve Bannon became head of Trump's campaign, the campaign closed out with a major ad lashing out at "those who control the levers of power in Washington ... a global power structure that is responsible for the economic decisions that have robbed our working class, stripped our country of its wealth and put that money into the pockets of a handful of large corporations and political entities."

As those words were read, the faces of prominent Jews in finance and government appeared on the screen.

* * *
Steve Bannon is misogynist, racist, promotes hatred for LGBT people, whips up xenophobia, and is anti-Semitic, as part of a whole fascist package. He is the incoming chief strategist and senior counselor in the Trump White House.

Anyone with a conscience who is repelled by what Bannon represents has the responsibility to confront the implications of that.