INDIA : HARSH THAKOR SAYS THE FLAME OF MAOISM CAN NEVER BE EXTINGUISHED AND ITS TORCH WILL ILLUMINATE EVERY CORNER OF THE GLOBE.FOR EVERY COMRADE LOST MANY MORE WILL EMERGE LIKE A RESSURECTION FROM THE GRAVE.SALUTE THE SACRIFICES OF MARTYRS WHO MEMORIES WILL BE PERMANENTLY EMBEDDED IN OUR MINDS AND WHOSE NAMES SHOULD BE INSCRIBED IN GOLDEN LETTERS .THEY HAVE SOWED THE SEEDS FOR THOUSANDS OF NEW ROSES TO BLOOM AND ILLUMINATE THE TORCH OF MAOISM.THEY ARE THE BEST SONS OF OUR LAND 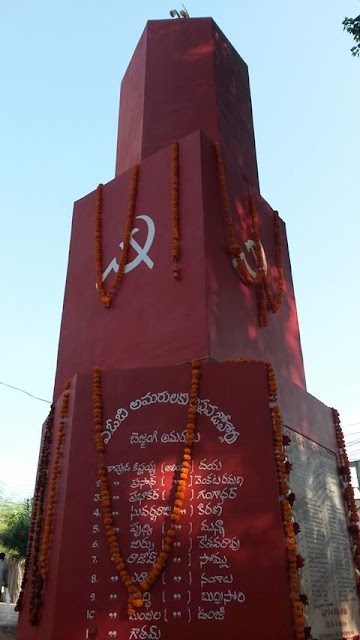 The Torch of red revolutionary resistance will never be extinguished and the blood of martyrs will flow forever like the water of a river..

They confirmed that the flame of Maoism could not be extinguished.

Of great relevance was the particpants of the masses,particularly women and that it was they and not just guerilla squad members who participated.

Vibration of the martyrs of the Chinese revolution were exuded in the memorial meetings.

Very soon a round table conference will be held in Hyderbad

.An All Indian Umiversity fact finding team has done great work in bringing out the true facts.

Of coure arguably the Maoist party may need to launch a rectification campaign and fortify it's security.

However they are still capable of replenishing their forces in areas like Chattisagarh as they have a mass base
Posted by nickglais on 11/20/2016 12:47:00 PM