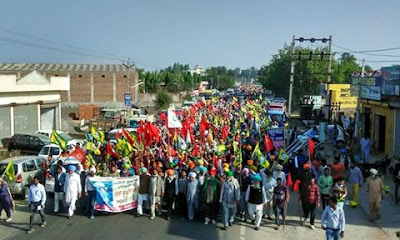 IT APPEARED AS THOUGH A TORRENT OR STORM HAD ERUPTED IN SANGRUR CITY LIKE A HUGE ARMY CONVERGING.8000 PEOPLE PARTICIPATED IN THE FINAL PROTEST DEMANDING JUSTICE FOR THE MURDER OT GURDEV KAUR .2 OF THE 7 CRIMINALS RESPONSIBLE FOR HER DEATH HAVE BEEN BROUGHT TO THE BOOK AND THEY WERE THE MAJOR ONE'S.HEARTENING TO SEE SO MANY WOMEN COMRADES CARRYING THE TORCH.IT IS TRIBUTE THAT FOR SUCH A PROLONGED PERIOD THE MASSES DISPLAYED SUCH STRONG RESILIENCE ILLUMINATING THE FLAME OF RESISTANCE LIKE A BOULDER DEFYING A STRONG GALE.

One of Punjab's most effective rallies ever fighting for justice for the landless dalits ever in Punjab was held in Sangrur district headquarters today .8000 people thronged shimmering the light of resistance.

Today was the concluding day of the protest demanding prosecution of the killers of gurdev kaur and 2major crimiunals were brought to the book.

All democrats must salute the Jaloor Jabbar Virodhi action commitee for burning the flame of resistance for such a prolonged period and bringing the killers to the book.

It will pla a major role in the dalit landless labourers fortifying their base of struggle and sharpening their sword to defy the attack sof landloird forces backed by the ruling parties.

A great march was earlier held going towards chief minister Prakash Singh Badal's house which was obstructed by the police on 20th November .

This depicted the true nature of  how the administration is so partisan with the ruling classes and lifts every straw to surpress the people's genuine movements.

Neverthless we must continue the 5 day long gherao of house of Parminder Singh Dhindsa which had a strong impact.

It was a lesson to all democratic forces in how to organize democratic resistance and was overall a tribute to the revolutionary democratic movement of Punjab.

The role of women and youth was heartening as well as the support  of the landed peasantry .

The preparatory work of Zameen Prapt Sangharsh Commitee must be saluted for laying the seeds for the future struggle.for one of the best resurgence of dalit landless labour movement in recent decades.

It proves the potential the dalit community has to light the spark of resistance and turn it into a flame
Posted by nickglais on 11/24/2016 11:30:00 AM