Iran to Respond to new US Sanctions 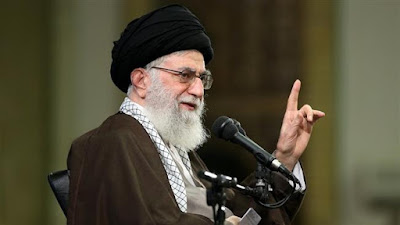 Democracy and Class Struggle the appointment of Nikki Haley as US Ambassador to UN lines up another prominent anti Iran Deal voice in USA.

Also note that the so called "moderate" for US secretary of State Mitt Romney has said he would support Israeli  attack on Iran and has advocated bombing Iran and of course is against Iran Deal.

So John Bolton is an extremist and Mitt Romney a moderate !!!


Leader of Islamic Revolution Ayatollah Seyyed Ali Khamenei has said that Iran would respond if the US proceeded to renew the Iran Sanctions Act (ISA) which expires at the end of 2016.

The US House of Representatives voted for a 10-year extension of the ISA earlier this month but to become law, the bill has to be endorsed by the Senate as well and signed by the US president.

“So far, the current US government has committed several violations with regard to the nuclear agreement,” Ayatollah Khamenei told members of the volunteer Basij forces in Tehran on Wednesday.

“The most recent of them is the 10-year extension of the sanctions. If these sanctions are extended, it will surely constitute a violation of the JCPOA and they (the US) should know that the Islamic Republic will definitely react to it,” he added.

Iranian officials have already warned that a possible extension of the ISA would breach the Joint Comprehensive Plan of Action (JCPOA) -- a nuclear accord with Iran under which the US, the EU and other countries undertook in 2015 not to impose new sanctions on Tehran.

Last week, the US House also passed a bill that would block the sale of commercial aircraft by Boeing and Airbus to Iran, with the Obama administration admitting that the legislation would be a violation of the nuclear pact.

Last week, Secretary of Iran’s Supreme National Security Council Ali Shamkhani addressed US officials in a strident tone, warning them about a possible breach of the deal.

“If you extend the sanctions, this will mean kicking the JCPOA away and we will confront it through implementing powerful technical packages,” he said without elaboration.

US President-elect Donald Trump has said it would be hard to destroy a deal enshrined in a United Nations resolution. In August 2015, he said he would not "rip up” the nuclear deal, but that he would "police that contract so tough they don’t have a chance.”