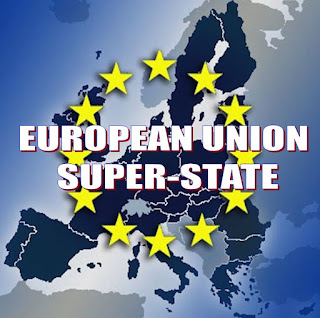 Illusions of some sections of the Labour Movement, the  left and other  liberals have led to a reservoir of continuing support for the EU.

In addition the hijacking of the Out Campaign by UKIP has alienated many others.

I have noticed four main themes in this EU support:

The EU protects our human rights especially from from the Tories.

The EU has prevented wars in Europe.

We are financially better off in the EU

We need to be part of the EU to trade

Each of these need to be addressed.

I wish to concentrate on the burgeoning EU Super State

THE NATURE OF THE EUROPEAN UNION AND ITS STATE


One of the main faults of the “Social Democrats” of the 2nd International (apart from backing the “Great War”) was their failure to understand the nature of the State.  ( Jeremy Corbyn is making the  same mistake in 2016)

The view of Scientific Socialists,  (Marxist/Leninists) is that the state is not a neutral body assisting government but is an instrument by which one class imposes its rule over another. This applies to the capitalist state and the state under socialism.

“The state is the product and the manifestation of the irreconcilability of class antagonisms”(p.12 The State and Revolution” V I Lenin.

Many advances in Social Services, Pensions, Health Care and Education have also blurred the perception of the British State.

However, these advances can easily be lost as we have seen recently, exposing the true nature of the bourgeois state its laws, police, civil service and judiciary.

How then should we view the role of the European Union, its institutions and political direction?

Since being agreed in 1957 and established in 1958, the “Common Market” or The Treaty establishing the European Economic Community (TEEC) “Treaty of Rome” there have been many incremental and insidious changes.

Through the The Merger Treaty, The Single European Act, The Amsterdam Treaty ,Maastricht Treaty, the Nice Treaty and the Lisbon Treaty bit by bit the nature of this Trade agreement has changed  and the power of the EU over its member states has been increasing.

The much vaunted vetoes of individual nations have all but disappeared.

The latest, the Lisbon Treaty effectively bans socialism or any restriction on the free market.

The imposition of  The Trans-Atlantic Trade and Investment Partnership (TTIP) will shackle and imprison socialism along with the countries that wish to implement any public control or any standards which will or may  reduce profits or infringe upon the Free Market.

It is effectively impossible to obtain all the details of the TTIP agreement that the unelected Commissioner is negotiating (see However, one dangerous element is that there appears to be no way to change TTIP or opt out after it is agreed).

The fact that there is an elected Parliament gives the impression the the EU is democratic in nature but this could not be further from the truth.

The attached graphics outline the way the EU is governed and the Parliament has effectively one power only, that is to sack the Commission in total, which it did in 1999 as a result of a high level of fraud. (the EU finances have never been approved by the auditors). 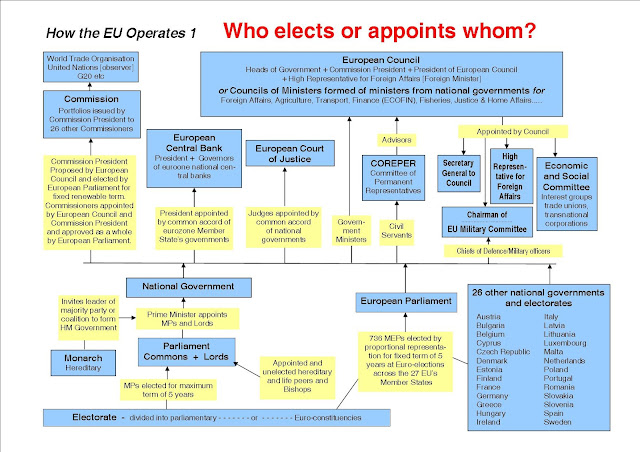 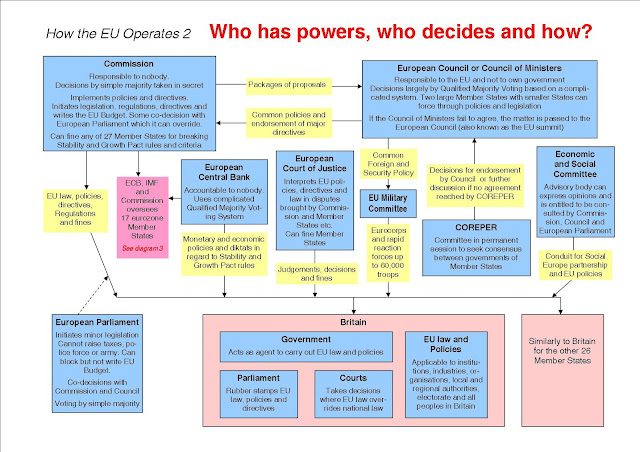 The real government of the EU is the unelected officers of the Commission one of whom, Cecilia Malmström, is negotiating the TTIP agreement in secret.

A  claim was made by John Hilary, the Executive Director of campaign group War on Want, in an Independent Voices article.

In the piece Hilary said he had met with Malmström earlier this year and challenged her on why she insisted on continuing the TTIP negotiations when so many EU citizens  (over 3 million) were against it.

She coldly said “I do not take my mandate from the European people.”

Later in a video Malmström says: “I have not said that. What I was trying to explain was that the mandate to negotiate TTIP and all other trade agreements is given by the Council [of Ministers].

This clearly indicates that the Council itself does not consider itself answerable to the European people.

If this structure was not bad enough the day to day running of the EU is in the hands of an appointed Secretariat even more removed from democratic control.

It currently consists of 7 directorates-general, the Legal Service, 5 departments under the Secretary-General (e.g. internal audit, general political questions) and has around 3200 employees.  (See attachment 2).

To understand the bureaucracy, treaties and thousands of directives would take a legal mind and tremendous patience. Suffice to say the government by the Commissioners is not open to scrutiny or open to criticism.

Returning to TTIP, if the Treaty is binding and cannot be altered or exited, this raises the question of how it can be implemented. We have seen Greece crippled by the IMF, the EU Bank and Merkel the Italian government replaced and the banks in Cyprus robbed but legal enforcement may have to resort to physical force.

In this context the proposal by Jean Claude Juncker (see below) for an EU army becomes frightening. Our police force is already undergoing training in Israel and Saudi Arabia. How long before they put this training into practice at home.

In the coming capitalist crisis and the battles that will result we need to have as much room to manoeuver as possible.

Particularly to negotiate equitable agreements with the developing world.

The 3rd Reich was formed when Hitler was appointed Chancellor and changed the Laws.

Restrictive laws are already in place banning socialism and social ownership and intervention Trade Unionists, environmentalists, nationalists and democrats will bear the brunt of the attack.

However, like in the Italian and German Steel industries and European railways they have not yet been enforced.

If the EU and the US gets the state power to enforce them and TTIP we have a ready made European 4th Reich.


The Illusion of Democracy 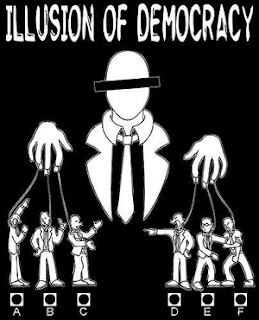 The documentation of the EU is deliberately misleading, listing; the bodies of the EU as;

As if the Parliament was the highest body. In fact the Parliament has no effective powers except for the ability to sack the Commission as a whole which of course is then reappointed. This happened after fraud was uncovered in 1999.

Why the Crachach Love the European Union


The World of Imperialism