Europe Signed Pacts With Nazi Germany — But Only the USSR Is Still Accused of 'Colluding' With Hitler by Dr. Oleg Nazarov 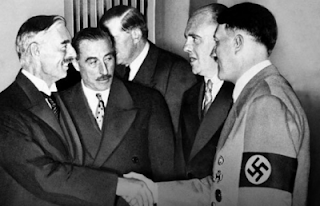 In January 1934, Poland was the first country to sign a non-aggression pact with the Third Reich, after which Great Britain and France did the same. So why is the USSR is still being accused of collusion with Hitler?

The German-Soviet non-aggression treaty was signed on 23rd August 1939. The USSR in fact was the last large geopolitical player to make a pact with Germany, and it did so because it had no other choice.

London and Paris thrust the USSR into this position by appeasing Germany at the cost of other countries’ interests and territories. When Russia signed, Poland, Great Britain and France had already done so. Like today, the West  had double standards in the 1930’s. The German-Soviet non-aggression treaty is still referred to as the ‘Molotov-Ribbentrop Pact’, citing the name of Hitler’s famous Minister of Foreign Affairs, who was hanged at Nuremberg for his crimes, casting a shadow on the Soviet People’s Commissar of Foreign Affairs and on the USSR.

The British never refer to a similar document signed on 30th September 1938 by Adolf Hitler and Great Britain’s Prime Minister Neville Chamberlain, as ‘the Hitler-Chamberlain Pact’. The Poles who signed the treaty with Germany earlier in January 1934 never refer to it as the ‘Pilsudski-Hitler Pact’. The leaders of Poland, Great Britain and France all shook hands with Hitler, not Joseph Stalin.

In the 1930’s, many countries signed agreements with Hitler. At that time no one considered it disgraceful. A key event was the famous ‘Munich Betrayal’. On 29th September 1938, Hitler convened Italy’s Benito Mussolini, Britain’s Chamberlain and France’s Eduard Daladier to decide the fate of Czechoslovakia. There was no representative from Czechoslovakia or the USSR at the Munich negotiations. Although Poland was eager to sign the agreement on the partition of Czechoslovakia, Chamberlain called it ‘the coach’s fifth wheel’.


In 1939 when the pact with Ribbentrop was being signed in Moscow, Stalin remembered what had happened eleven months previously in Munich. Europe’s fate had been decided without the USSR, as it tried to lure the aggressor toward the East.

Let’s imagine that the USSR hadn’t signed the document. Wouldn’t Hitler have attacked Poland? Of course he would, having already decided that in April. Then there is the question of the territories of the western Ukraine  and Belorussia. If they hadn’t been annexed to the USSR, there would have been two possibilities: Germany would have either seized them or formed a quasi-state in the Ukraine. Anyway they would be a bridgehead to the USSR.

Clearly, it was Hitler who benefited most of all from these prewar pacts. The French gained nothing. During the 1930’s they followed Britain, which was an island, while France was contiguous to Germany.

The Poles acted most foolishly. Warsaw hoped Great Britain and France would help it in the event of war as stipulated in an agreement between them. The latter declared war on Germany but then capitulated, scarcely even assisting Poland with arms.

The USSR benefited to some degree from the pact, gaining extra time and territories. If we compare the Red Army of 1939 with that of 1941, the latter outmanned and outgunned the first.

The territories of the western  Ukraine  and Belorussia, regained in 1939, helped our grandfathers and great-grandfathers resist in 1941. If Germany had occupied all of Poland in 1939, the Wehrmacht would have been that much closer to Moscow and Leningrad. As we know, in 1941 they came within kilometers of Moscow.

Today, in an attempt to put the USSR in the same league as Germany and make it one of the two culprits of the Second World War, the West is trying to change Russia’s geopolitical status.