INDIA: A REQUIEM FOR THE NATION IN DARK TIMES: AN APPEAL TO THE LEFT, DEMOCRATIC, STUDENTS, DALIT AND WOMEN’S MOVEMENTS BY ASIT DAS 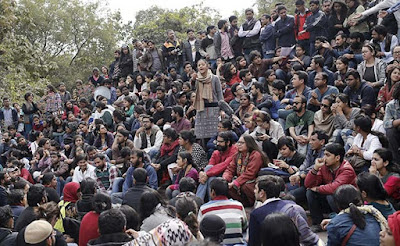 A REQUIEM FOR THE NATION IN DARK TIMES: AN APPEAL TO THE LEFT, DEMOCRATIC, STUDENTS, DALIT AND WOMEN’S MOVEMENTS

The Fascist Hindutva forces have struck badly at JNU this time after baying for blood in FTII, Pune; Banning Ambedkar Periyar Study Circle in IIT Madras.

Institutional murder of Rohith Vemula in HCU, Hyderabad, in their nefarious design of forcible saffronisation of Indian higher educational institutions.

For the past few days one is witnessing medieval witch hunt and naked white terror to advance the Hindu nationalist agenda of fascist Sangh Parivar in JNU.

The corporate media has been spewing venom against JNU painting it is as a den of anti-national activities.

In the name of imposing the Hindutva style of nationalism on JNU, there a frightening witch hunt is going on to arrest students who belong to different ideological persuasions.

It is not only the students of JNU and University of Hyderabad were protesting against the hanging of Afzal Guru and Yakub Memon, but a wide range of left, democratic and civil society groups are campaigning against death penalty.

The JNUSU president who is in record saying he didn’t criticise Indian nationalism and upholds the Indian constitution.

Even after this he was arrested and sent to police remand for three days. There has been raids of male police in girls’ hostel to arrest.

It should be noted that sedition law was enacted by the colonial authorities against the leaders of anti-colonial struggle leaders. It was used against Bhagat Singh.

The post-colonial Indian ruling classes have ruthlessly used the same colonial sedition law to clamp down on dissenting views and social movements who challenged the contemporary capitalist developmental trajectory.

The sedition charges against Dr. Binayak Sen, Kudankulam anti-nuclear plant activists are few glaring examples of misuse of sedition law, to stamp out any form of dissent that is unpalatable for the people controlling state power in India.

Any university is a space for free debate and a healthy debate between the contending ideologies. Using sedition to clamp down dissenting voice in JNU is naked state terror on the students who refused to endorse the Hindutva brand of Nationalism, the corporate media who was instrumental in building up a larger than life image of Narendra Modi in the Lok Sabha election,it has now has gone into its most loyal display of servitude to the Sangh Parivar endorsing very jingoistic brand of macho-HIndutva nationalism on the student community who have the basic democratic right to interrogate the nationalism of ABVP.

If nation consists of Adivasis, Dalits, Women, religious minorities then the Sangh Parivar has been in forefront in committing atrocities on these communities so they have a right to interrogate the Sangh Parivar’s version of Fascist cultural nationalism where they forcibly dictates who will eat what.

The Dadri lynching has raised the question of intolerance towards the cultural diversities which showed the shocking limits and farce of democratic pretensions and the will of tolerance of the saffron forces.Off course, every civilisation has certain limit to tolerance.

Any civilised democratic society should not tolerate sexism, racism and casteism. It is here the lumpen brigade of the fascist Sangh Parivar has crossed the limits of civilised behaviour allowed by a state which calls itself the largest democracy in the world.

In the contending discourses of nationalism one can clearly see a pattern how the Indian state led by a fascist Hindu party and a PM whose palms are dripping with the blood of thousands of Muslims murdered in Gujrat.

He is using state power to forcibly impose the Hindutwa version of nationalism all over India. A C grade actor, Gajendra Chauhan was imposed on FTII, Pune students and Ambedkar Periyar Study Circle in IIT Madras was banned and later withdrawn after protests all over the country.

But there is interesting parallel between what happened in HCU and JNU in branding people as anti-national.

BJP MP from Secunderabad and union minister Bandaru Dattatreya wrote to MHRD minister Smriti Irani to take action against ASA students branding them anti-national. A witch hunts of Dalit student was pursued by HCU under the direction of MHRD, which resulted in the institutional murder of a Dalit student Rohith Vemula. Similar pattern was adopted by the fascist saffron forces to brand JNU students as anti-national.

Following the controversy of a cultural programme organised against the death penalty of Afzal Guru. Mahesh Giri, the BJP MP registered an FIR against JNU students branding them anti-national and demanding strict action against voices who don’t conform to Hindutva brand of nationalism. Delhi Police went overboard to appease its political masters unleashed a rain of terror in JNU campus in the name of a very arbitrary notion of the one dimensional Hindutva definition of nation. This controversy has led to a serious rethink about the very concept of the term Nation .

A Nation is just not a map in the atlas ruled by a political executive representing the interests of a minority propertied elite. If the nation means the majority of subaltern masses which includes workers , peasants, women, dalits, adivasis, sexual minorities, religious minorities, different ethnic and oppressed minorities then this arbitrary homogeneous notion of Hindu nationalism obliterates the really existing broad masses who are excluded in BJP’s scheme of nation.

If the Nation means we the people then it means the vast majority of india’s working people, who are mostly Dalits, OBC’s, Muslims and Woman.

The Sangh parivar makes a mockery of nationalism where it’s version of feminized nationalism in the image of the exalted Bharat Mata has no place for it’s own children. The students of JNU have every right to critique this version of neo-colonial dubious nationalism, where the BJP lead ruling dispension is selling this country into bits and pieces. The hindutva mascot Narendra Modi goes around the world inviting imperial capital to come and capture the natural resources of the country at throw away prices.

When the peasants and adivasis protest against these pro-imperialist policies, the Indian state comes down heavily on them and unleashes the most brutal kind of state repression on people who are struggling to save their land, water and forest. JNU students were protesting this kind of spurious nationalism where the BJP goes all out to sell this country’s livelihood and natural resources.

The Indian state has unleashed a barbaric war of elimination on adivasis in the name of operation green hunt because they were resisting to give away their land for the loot of national and international big business. Thousands of innocent muslim youth are behind bars in the name of equally fake war on terror designed by the imperialist forces. Sexual violence against woman and atrocities on dalits are the order of the day. Jails are packed with political prisoners.

This is a classic case of the nation devouring it’s own children. The students of JNU were protesting against this type of convulated nationalism. If one differentiates between nationalism and patriotism, if being a patriot means fighting for the true interests of the country, then the students of JNU are exemplary patriots, who have relentlessly fought against selling away the country in the name of globalization.

If the nation means the people of the country, then students of JNU have always steadfastly stood for the interests of workers, peasants, woman, dalits, adivasis, religious minorities, oppressed nationalities and sexual minorities, who form the core of the of the socalled nation in the image of hintuva brand of an arbitrary constuct of a super imposed nation.

The police raids in hostels reminds one of the midnight knocks of Nazi era in Germany. Old JNU students say this is similar to the raids during the dark days of emergency. The Indian state has imposed an undeclared emergency in JNU. Today the white terror in JNU resembles a frightening Panopticon. What we are witnessing in JNU is not the normal face of a democratic state, but state of exception.

Where the so called democratic state has declared a war on it’s own people. Fake encounters, torture, custodial deaths and thousands of Adivasis,muslim youths and political prisoners are languishing in jail,this is not an exception but normal state of affairs in the nation,is it not a pointer where the nation is in an unjust war on its own people?

vIndia indeed has become a country with out a post office, where the hapless citizens have no window to express their grievances, any form of dissent is ruthlessly stifled under the jackboot of police and paramilitary forces of a fascist pro imperialist state.

In their opinion on women the feudal brahmanical patriarchal rank and file activists of the Hindutva Brigade have absolutely crossed the limits of tolerance in any civilised society. Here vociferous demand has to be made to punish the culprits who passed obscene sexist remarks on women.

Jawahar Yadav, a sexist saffron stormtrooper, who is also the OSD to Haryana CM recently passed a ugly vulgar remark comparing JNU women students with prostitutes. Here they have crossed all limits of tolerance.

This is absolutely obscene, sexist, misogynist and outrageous. Using terms like prostitute degrades the entire women on the planet anyone who utters these terms should be punished.

The statement of Jawahar Yadav is an indignified, sexist attitude on sex-workers who are struggling for a dignified life and decriminalization, this statement demeans and degrades their struggle, so it should be condemned by all democratic forces.

The children of much extolled Bharat Mata, who constitute the nation were shocked and shamed by the hooliganism of the Sanghi goondas dressed as lawyers in the Patiala house courts on 15th February, Monday, when they ruthlessly assaulted the students an teachers of JNU, who had gone to meet Kanhaiya Kumar, the president of JNUSU, who was supposed to be produced on the same day. The saffron vandals made a mockery of the sanctified and mystified Bharat Mata, when they inappropriately manhandled the women teachers of JNU. Many women journalists were punched and shoved around.

Jawahar Yadav withdrew his remarks after an out pour of rage in the social media, but this does not absolve him of his crime. Jawahar Yadav’s statement on women students of JNU and sex-workers, the inappropriate manhandling of woman teachers in the Patiala house court is not only obscene, outrageous and sexist, but absolutely unacceptlable in a civilized democratic society. The left, democratic and woman’s movement should take cognizance of this unpardonable crime against woman and should demand stringent punishment of the culprits.

Finally, as an ex-student of JNU I am proud of the students of JNU, who have challenged the hegemonic hindutva notion of a dubious,hyperbolic macho,jingoistic, slapstick nationalism and stood up for the real constituents of the nation, women, Dalits, religious minorities, workers and peasants.
-Asit
Ex-student of JNU
Posted by nickglais on 2/22/2016 02:02:00 AM