Almost a thousand students marched on the Jadavpur University campus today, condemning Hindutva crackdown at JNU and the arrest of JNUSU President Kanhaiya Kumar, who has been sentenced to judicial custody for 14 days. The students marched across the campus and built a barricade led by JU professors at Gate No. 4,  where ABVP activists were supposed to arrive as per the threat issued to the protesting students yesterday by the National Secretary of BJP.

Anticipating a clash, police formed a barricade in front of the students, and imposed Section 144 on the area. An ABVP contingent of 300 arrived, armed with sticks and rods to beat up the students, who they labelled “Deshdronhi” (Traitor) and wanted to be hanged.  They carried Indian flags, chanted Vande Mataram and played the Gayatri mantra on speaker. The ABVP activists then clashed with the police, where a scuffle ensued and one ABVP activist assaulted a police officer. 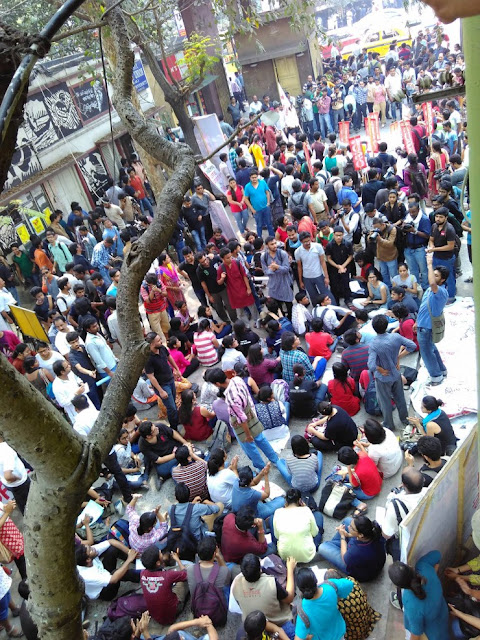 A Congress rally parallely arrived around noon to support the protesting students. ABVP was quick to label them deshdrohi as well, which is when Congress activists hurled sticks at ABVP. Confronted by the barricade built by the students and professors of JU, ABVP was forced to return but not before they stated that they had full faith that the state government would take action against the “anti-nationals”.

“We are standing at a juncture where leftists are being witch hunted and put in jail . In the face of utter violence that destroys democracy, the Left which has been divided by differences and debates has finally found a common ground in resisting this fascist counter revolution of the state. This united resistance is revolutionary because a rally sanctioned by the state could not overthrow the movement today. The Left finally found common ground as SFI, AISA activists, anarcha feminists and anarcha communists showed up to signal to the state that this violation of democracy will not be tolerated. It is a signal of the coming times to come, both in terms of the state and the Left”, said Nabottama Pal, an activist of the feminist group Periods.

Sampriti Mukherjee, an activist of AISA added, “The success of today’s unity was a remarkable feat for the beginning of a Leftist movement in future. The clamping down of student voices across campuses in India, charging them with sedition, is an attack on freedom of speech and Leftist identity. While the Hindutva groups are calling all Communists traitors, the Left is uniting with bravery: this is a big step for future revolution.”

ABVP also lodged a PIL against those students and professors who participated in today’s rally, demanding that the court take action. The BJP rally which was supposed to arrive at JU at 4pm was cancelled due to the imposition of Section 144 in the area.