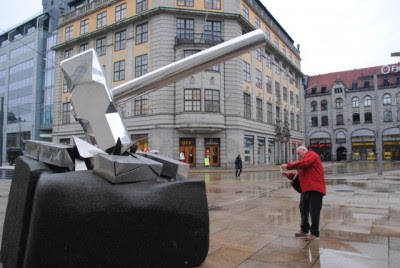 Democracy and Class Struggle says the Show Trial in Norway currently underway of members of SOS Racism reminds of how the Norwegian State treated the Osvald Group of Anti Nazis Resistance fighters after the Second World War and reminds us that the battle against Nazism and Racism is essentially a continual People's Fight .

Seventy years after they helped liberate Norway from the Nazi German occupation, members of the resistance organization known as Osvaldgruppen (The Osvald Group) have finally won recognition in the form of speeches and a sculpture.

This new sculpture, set up as a monument to the Osvald Group for its resistance efforts during World War II, has attracted both criticism and debate. It was unveiled in front of Oslo's central train station on May 1st, 2015 the Labour Day holiday.

Five surviving members of the Osvald Group unveiled the sculpture meant to serve as a monument to the group’s contribution during World War II, and to the lives lost as a result of their resistance efforts.

The group was one of the first and most active armed civilian groups resisting the Nazi German invasion of Norway, and known for its members’ daring acts of sabotage against German installations and the Norwegian industry that served them throughout the war.

The Osvald Group was best known, however, for being led by radical socialist Asbjørn Sunde, a member of Norway’s communist party NKP during the 1930s who fought fascism in Spain and started resisting the Nazi movement early.

He used the cover name “Osvald Pettersen,” hence the name later given to the group he led even before the Nazi invasion of Norway in 1940. The Osvald Group later took orders from both the exiled Norwegian government in London and officials in the Soviet Union.

While Sunde was one of Norway’s most important resistance leaders, his Soviet ties and communist sympathies were unpopular after the war and he was convicted of spying for the Soviet Union in 1954. The Osvald Group and its members never won the honours, public gratitude and positions of post-war power accorded other Norwegian resistance heroes.

Efforts to finally honour the group, in line with the long-overdue recognition accorded the Pelle Group of wartime saboteurs just two years ago, emerged with the formation of a committee to raise an “anti-fascist monument” in front of the train station, since much of the Osvald-led sabotage was against state railway NSB. 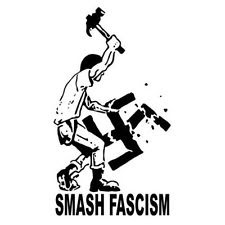 The leader of the committee that selected Gulliksen’s design, Hans O Felix said. “There will certainly be many opinions about the monument and that’s just fine,” Felix told newspaper Dagsavisen. “The process was carried out in a good manner and it was a unanimous jury (who chose the sculpture) and it’s gone through several municipal agencies. We’ve gone by the book. I have a good conscience.”

The city, meanwhile, has only granted temporary placement at the central station and the monument may later be moved. The five survivors of the Osvald Group itself were more concerned with finally receiving recognition, for better or worse.

“I think the unveiling was dignified and fine,” Anne Marie Malmo, who was part of the Osvald Group in Bergen, told Aftenposten. “What’s most important is that those who gave their lives (to the resistance effort) will be remembered.” 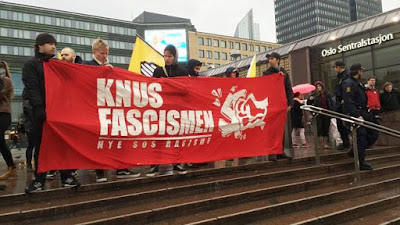