India : Defend Umar Khalid - he is no Jihadi he is a Comrade 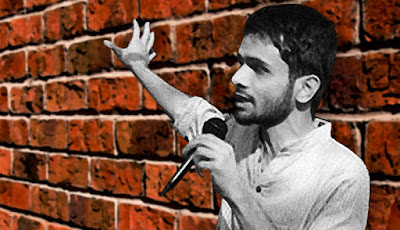 The Bharatiya Janata Party (BJP) tried to portray Rohith Vemula anti-national; but today he has become an icon for all those fighting against social and systemic oppression.

Since Rohith's death, the BJP has been looking for a way to exorcise the Dalit scholar's ghost. They have been looking for the perfect 'anti-Rohith Vemula', one who would not only divert attention from Rohith, but also delegitimise student activism across the country.

Last week, they picked up Kanhaiya Kumar, president of the Jawaharlal Nehru University Students' Union (JNUSU) and charged him with sedition. "We arrested a Bhumihar from Bihar, now you can't call us anti-Dalit," a RSS functionary boasted, while speaking to Catch.

But even that backfired. Kumar's humble background and his fiery speeches, which are nationalistic in their own way, made it difficult to project him as a traitor. The fact that he belongs to the student wing of a mainstream Communist Party India (CPI), also helped his case.

Not just the Left, other Opposition parties such as the Congress, Janata Dal (United), Bahujan Samaj Party and Aam Aadmi Party came out in his support.

Instead of the anti-national BJP was looking for, Kanhaiya has become another symbol of opposition against the Narendra Modi government.

The Modi regime has finally found its prey - Umar Khalid. A member of the now dissolved Democratic Students' Union (DSU), he was one of the organisers of the controversial event on 9 February. "Anti-national" slogans were chanted in the protests that followed the cancellation of the event.

'Jihadi' to the rescue

Umar suits the BJP's brief perfectly. He has the right name -- a name around which various conspiracy theories involving Pakistan-based Jihadi organisations, the Inter-services Intelligence and Kashmiri separatists can be woven, with a few critical keywords like 'indoctrination', 'infiltration' and ' sleeper cells' thrown in.

By Monday, it was clear that arresting Kanhaiya had backfired on Delhi Police and the BJP. If pressure from Opposition parties wasn't bad enough, BJP MLA OP Sharma and his goons engaged in mob vigilantism outside the Patiala House court, attacking JNU students, teachers and even the media.

So, it was hardly surprising that on Tuesday, the hyper-nationalist sections of the media, who miraculously managed to escape Sharma's attack, turned their focus on Umar. NewsX alleged, on the basis of an anonymous Intelligence Bureau input, that Umar is a sympathiser of the Jaish-e-Muhammad. The channel alleged that he was the mastermind behind the entire protest and that he had facilitated the "infiltration of Kashmiri men into the JNU campus".

The channel ignored the names of all other organisers.

The IB report quoted by the news channel also claimed that Umar had visited Pakistan some years ago. The police are on the lookout for Umar and they "raided" his house on Tuesday.
As a result of these reports, Umar's family have been facing death threats. Even his mother and 12-year-old sister were threatened.

ABVP supporters have put up posters across Delhi, exhorting people to "catch this traitor".
Even a brief look at the discussions on the social media would reveal how a section of the people are baying for Umar's blood.

What does Umar Khalid actually stand for?

1. "Umar Khalid is a communist. As communist as it gets in JNU.

2. He is no Muslim, except by birth. Like all true communists, he doesn't believe in any power superior to human beings.

3. Umar is no supporter of Pakistan. The State is just an organ of class rule to his communist eyes. And the conflict between India and Pakistan just a red herring in both countries, to confuse the people," writes one of Umar's friends on Facebook.

DSU, of which Umar was a part, claimed to be a progressive organisation that upheld Maoism. In November last year, DSU dissolved when Umar and 10 others resigned from the organisation. The reason they gave was that "the perspectives upheld by the revolutionary movement on gender are feudal, moralist and reactionary, albeit being couched in Marxist jargon".

Here's an article they wrote last month titled 'Revolutionary Sexism - a critique of Indian Maoism' that explained their position. Click to read.

From what one can gather, Umar isn't very different from Rohith in his beliefs. Perhaps on issues such as Kashmir, Rohith and Umar have much more in common than Kanhaiya.

Now, even if Umar wasn't a communist but a practising Muslim, it wouldn't make him any more or less of a terrorist.

But because of the media, a nationwide lynch mob has gathered against Umar. Even if he is acquitted, it is unlikely that he would ever have a normal life. It was this desire for a normal life that came across vividly in Rohith's letters. But normalcy is what he was deprived of in life as well as in death.

Umar's friends' say that his life is being destroyed almost the same way as Rohith's was destroyed after he was labelled 'anti-national'.

"AFTER ROHITH, YOU HAVE ALMOST DESTROYED ANOTHER LIFE. YOU MADE SURE THERE WILL BE NO 'NORMAL' LEFT TO RETURN TO FOR THE DISSENTER YOU HAD MARKED AND WHOM YOU NOW HOUND & HUNT. BUT YOUR BIGGEST CRIME IS THIS: YOU USED THE TOTALITARIAN POWER OF TV TO KILL UMAR BY ERASING EVERYTHING HE STOOD FOR & MANUFACTURED A MONSTER FOR THE IGNORANT & AT-YOUR-MERCY 'COLLECTIVE CONSCIENCE,' his friend writes on Facebook.

Even if Umar did visit Pakistan years ago, how does that constitute as evidence of his terrorist links? Pro-RSS journalist Ved Pratap Vaidik not only went to Pakistan, he even met Jamaat-ud-Dawa chief Hafiz Saeed. No one called him a traitor. Perhaps because his name isn't Umar Khalid.

Would a small event like the one that was organised in JNU be planned years ago and merit a full-fledged visit to Pakistan?

By the way, Umar doesn't even have a passport. So the question of visiting Pakistan doesn't really arise.

Why is there so much emphasis on "infiltration of Kashmiri men" into the campus? If the channel considers Kashmir to be an integral part of India, why should it be cause of concern if a few Kashmiri men visit the campus of a central university?

Students at the Jadavpur University shouted similar pro-Azadi slogans on Tuesday, during their protest against Kanhaiya's arrest. So if such a protest can be organised at such a short notice, why would a JNU protest needed an elaborate conspiracy, involving 'Pakistani handlers' and Kashmiri 'infiltrators'?

The Jihadi link to the JNU event was far-fetched to begin with. Union Home Minister Rajnath Singh asserted that the protest was supported by Lashkar-e-Tayyeba. If Singh and the IB input cited by NewsX are both correct then it would mean that the JNU protest was a fantastic collaborative effort between Lashkar-e-Tayyeba, Jaish-e-Muhammad, Indian Maoists and Kashmiri separatists.

In fact BJP leader Kummanam Rajasekharan has alleged that even Malayali separatists were part of the event.

The complete absurdity of Singh's claims was exposed when it came to light that it was based on a tweet from a fake Hafiz Saeed Twitter handle. How can that be explained?
Posted by nickglais on 2/19/2016 06:32:00 AM